Jellyfish make swimmers’ lives a misery but how important are they to the ocean? 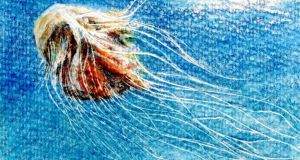 The biggest specimens of lion’s mane are in Arctic and north Atlantic waters, and one reason for its abundance off Leinster could be that colder water at the bottom of the western Irish Sea suits successful production from the polyps. Illustration: Michael Viney

Those lion’s mane jellyfish that made the lives of some swimmers a misery last summer were of exceptional size. One stranded bell, stretched flat on a Co Galway beach in July, measured nearly 1.5 metres. Stings from the animals’ thousands of tentacles, many scarcely visible and trailing many metres long, were commensurately painful, and sent some swimmers on both coasts to hospital.

Where did the jellyfish come from? Cyanea capillata do not deliberately congregate, yet their particular abundance off the Leinster coast has been recorded in surveys from the air and from ferries between Ireland and the UK. Marine biologists seek ways to know how far they were transported by currents, as full-grown bells, or if they are born more locally.

When a fertilised egg is released by the jellyfish, it drifts down to stick to a rock and grow a polyp, a dark little matchstick on the seabed perhaps 2mm thick. At the top it develops a growth like a stack of tiny saucers, each a potential medusa, or adult jellyfish.

These are cast off one by one, early in the year, and each begins to grow tentacles when around a centimetre across. From then on, its hundredfold expansion is fed on zooplankton such as fish eggs and larvae and even from other young jellyfish trapped in its broadening net.

The biggest specimens of lion’s mane are in Arctic and north Atlantic waters, and one reason for its abundance off Leinster could be that colder water at the bottom of the western Irish Sea suits successful production from the polyps. In the warmer ocean of climate change, however, the species might well retreat north.

If the menace of the lion’s mane has made it notorious in Ireland, many more jellyfish species have become familiar to swimmers and beachcombers – the brown-rayed compass, pink-eyed moon jelly and purple stinger. Even the big barrel jellyfish and little by-the-wind sailor are gaining public identities. But the sea around Ireland has a host of gelatinous species still needing study for their ecological role.

Perhaps the smallest and most innocent is the sea gooseberry, a clear, crystal blob that can wash up, gleaming brightly, on the beach. But many jellies of the deeper sea, while just as transparent, come in bizarre geometrical shapes and assemblies, like the random doodles one might make while on the phone at a desk.

The study of gelatinous animals has intensified greatly, prompted partly by the toxic impact of jellyfish blooms on fish farms and other aquaculture, but also their potential harm to fish stocks in the wild.

For his recent PhD research, Damien Haberlin of UCC made repeated plankton tows from across some 300km of the Celtic Sea, over the Celtic deep and into St George’s Channel in the lower Irish Sea. His nets captured samples of 21 of the smaller species. But they also revealed important differences in their ocean distribution, described in a paper just published in the journal Limnology and Oceanography.

Haberlin’s tows crossed the Celtic Sea Front, a seasonal and meandering ocean “border” between two different bodies of water. The main part of the Celtic Sea, south of Cork and west Waterford, becomes stratified in summer, creating an upper layer of warmer water.

This has twice the abundance of jellies found in cooler, mixed water beginning towards the mouth of the Irish Sea. And their nature is markedly different. The cooler waters have more ctenophores, with sticky tentacles, while the warmer waters are full of siphonophores with trailing nets of tentacles.

As commented by Dr Tom Doyle, co-author with Haberlin of the paper, the Celtic Sea is a “very dynamic water body with different ‘seascapes’ that we associate more with terrestrial environments” and presenting different hazards to fish.

Apart from providing food for specialised predators, such as leatherback turtles and sunfish, jellyfish have thus not seemed all that useful to ocean ecosystems or helpful to the human diet.

A totally unexpected benefit has now been advanced in the “gingerbread house hypothesis” proposed by an international biology team led from Queen’s University Belfast (online at https://iti.ms/2ISCh2U). It finds that more than two-thirds of the fish important to humans take shelter from predators, as juveniles, beneath or around jellyfish, sharing in the prey caught in their tentacles.

Jellyfish, it adds, can even be “key prey” for adult fish of commercial value. It offers the example that more than 20 per cent of Atlantic herring sampled in the Irish Sea have “jellyfish detected in their stomachs”.

All this, says Dr Jonathan Houghton of Queen’s, hugely changes our ideas about the creatures: “It’s almost a reboot of jellyfish ecology as a central part of the ocean system.”

1 Man unidentified in psychiatric hospital for 30 years may have DNA taken
2 Miriam Lord: Another dog’s dinner as D’Arcy jumps on the gravy train
3 The far right rises: Its growth as a political force in Ireland
4 ‘Insane’ gathering of hundreds of students in Galway condemned
5 Economic slump less serious than feared but jobs crisis looms
Real news has value SUBSCRIBE