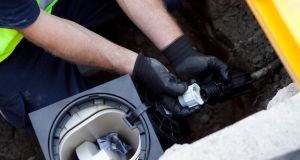 Fine Gael believes it is “far more efficient to install meters when new service pipes are being laid rather then retrospectively”. Photograph: Fennells

The Oireachtas committee on water is to recommend a referendum should be held to enshrine public ownership of Irish Water in the Constitution.

The 20-member committee met on Wednesday and signed off on the contents of the first four chapters of their report.

However, it failed to reach agreement on a proposal to place a legal requirement on all new dwellings to have a meter installed. Fianna Fáil, Sinn Féin and Anti-Austerity Alliance-People before Profit opposed such a measure.

Fine Gael and Labour sought approval to reintroduce the proposal at a later date when the committee meets to discuss the metering programme.

The party believes it is “far more efficient to install meters when new service pipes are being laid rather than retrospectively installing them”.

A number of contentious issues have yet to be discussed by the committee which plans a series of meetings in the coming weeks.

However, the committee has agreed to support a referendum on continuing Irish Water in public ownership.

It also supported measures to broaden the remit of the Public Water Forum to allow it make comments or suggestions about the performance of Irish Water.

Irish Water will also be asked to launch an education campaign on conservation, and inform primary and secondary school students of the need to protect supply.

The Government will be required to develop a cross-departmental strategy to increase water conservation which would examine existing building standards.

The committee is also recommending that all new buildings incorporate water conservation fittings similar to the building energy rating scheme.

The levy would be similar to the one on plastic bags, which generates little revenue but has altered people’s habits.

The report says users, who would otherwise be liable for an excessive usage charge, will be provided with a grace period of at least six months to reduce leakages below the appropriate threshold.

This period may be extended in certain circumstances with the approval of Irish Water. The proposal would be included in a fundamental redrawing of the 2007 Water Services Act.

Fine Gael is not fully committing to the compromise until legal advice from the Oireachtas parliamentary legal adviser is considered by the committee.

The party insists any agreement reached by the committee must be in compliance with the European Water Framework Directive, which has stressed the polluter must pay and costs should be recovered from the consumer.

Fine Gael is also seeking to remove the threat of taking householders to court or cutting off their water supply.