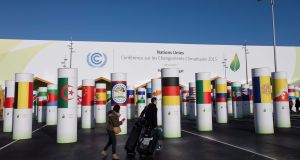 Ireland is ranked in 12th place in a survey of the climate change performance of almost 60 countries worldwide, released by Germanwatch and Climate Action Network (Can) Europe at COP21.

Given that the first three places are vacant, because none of the countries surveyed are said to be doing enough to reduce their greenhouse gas emissions, Ireland’s position is effectively in ninth place on the list.

The highest place is still occupied by Denmark for the fifth consecutive year, even though its new conservative government has recently pulled back on the country’s drive to achieve independence from fossil fuels.

Lurking down near the bottom of the list -- based on data compiled by local NGOs -- are Turkey, in 50th place, follow by Estonia, Taiwan, Russia, Iran, Singapore, Canada, South Korea, Japan, Australia and Kazakhstan.

For the first time, in this 11th edition of the Climate Change Performance Index, the authors applaud signs of a slowdown -- and even a halt -- in the growth of global emissions due to a rapid take-up of renewable energy.

Lead author Jan Burck, of Germanwatch, said: “The years 2013 and 2014 saw for the first time a higher amount of newly installed capacity from renewables than from all other energy sources combined.”

Although European countries still rank high, profiting from their early start in development of climate policies, the EU now “risks falling behind” as other countries “invest in renewable energy on a massive scale”.

The two largest emitters, the US (in 34th place) and China (in 47th), have both improved their rankings as a result of better policy evaluations, big investments in renewable energy and their start to shift away from coal.

One of the winners this year is France. Just in time for its COP21 presidency, the country climbed six places to arrive in the Top 10, mainly due the low level of per-capita emissions and a decreasing emission trend.