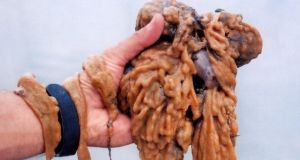 The National Parks and Wildlife Service says it is “aware” of the spread in south Galway Bay of the carpet sea squirt, a highly invasive non-native species that can smother marine life.

Marine biologist Dr Julia Nunn has said she is “very concerned” about the extensive growth of Didemnum vexillum in south Galway Bay since she first detected a small amount of it there almost seven years ago.

Didemnum vexillum, commonly known as “marine vomit”, is believed to have been carried from Japanese waters on ships’ hulls or in ballast water. It was first recorded in Ireland in 2005 in Malahide marina, Dublin, by aquatic invasive species specialist Dr Dan Minchin. He and colleagues have since traced it to Carlingford Lough, Co Louth; Strangford Lough, Co Down; Clew Bay, Co Mayo, and to Galway Bay.

Not enough is known about it to confirm whether it would have a serious impact on Galway Bay’s shellfish stocks such as its oyster beds, Dr Minchin said, but shellfish farming and scallops and herring spawning beds could all be vulnerable to it.

Dr Minchin said Dr Nunn’s observation on the low shore level at Parknahallagh near Ballindereen is particularly significant as it represents “the first indication here of abundant levels that are not associated with floating structures”.

Dr Nunn, who works with National Museums Northern Ireland, was on holiday on the west coast in September 2007 when she reported one single clump of the sea squirt on an oyster trestle at Parknahallagh.

She recently returned to the same location, where she found it in abundance on a number of oyster trestles and across the entire lower shoreline. She said that she spent about an hour on the shoreline at low tide, and “every boulder” had some of the sea squirt on it.

Dr Nunn said the spread resembled that which had occurred at Herne Bay in Kent, England, in late 2011.

Dr Minchin said small craft and aquaculture stock transmissions of oysters were the main means of its spread.

One of the worst cases is on the George’s Bank between Canada and the US in the north-west Atlantic, where it covers an estimated area of around 200 sq km, he said.

That gravel area had been traditionally fished for scallops, and is now carpeted with the acidic “compound tunicate”, as the species is known, which kills off the scallop larvae.

He has examined the spread of other Didemnum species in western Australia. Eradication is almost impossible, and expensive, he said, and Ireland’s best option may be management, which would require constant monitoring and sampling.The pendulous growths can tolerate sea temperatures between minus two degrees Celsius and 24 degrees Celsius, he said.

The Department of Arts, Heritage and the Gaeltacht, which is responsible for the NPWS, said it was “aware of the risks posed” and the “potentially adverse environmental impacts presented by a rapid proliferation of this species”.

A marine ecologist had been tasked by it to follow up on Dr Nunn’s report, a department spokesman said, and it expected to have a “clearer understanding of the most appropriate management response in the coming weeks”.

Didemnum vexillum was the subject of species alerts issued by the National Biodiversity Data Centre (NBDC) in 2007, and by the all-Ireland forum on invasive species, the department noted.

Invasive and non-native species are estimated to be costing €261 million annually to Ireland and Northern Ireland, due to biodiversity loss and impact on economic activity and human health, according to the NBDC.

Some 13 per cent of the 377 recorded non-native species here have a high-risk impact, its recent report has said.