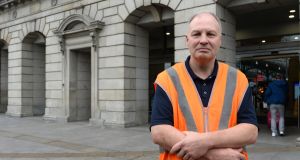 Tom Dempsey outside Heuston Station, Dublin: “The Luas drivers put up a good fight to get what they wanted but I just hope that our dispute doesn’t last as long.” Photograph: Brenda Fitzsimons

“It’s the Government that holds the purse strings to this dispute,” says Tom Dempsey (58), who has worked for Iarnród Éireann for the last 33 years.

Although his two children are grown up, Mr Dempsey says many of his younger colleagues need a pay increase because of the cost of living.

“It’s 10 years since I personally had a pay rise. The problem is that you have some of the most hardworking and diligent people working in the railway, and they are not being paid the amount they deserve in today’s climate.

“It’s starting to get to the stage where some of my younger colleagues have families and they are struggling. My kids are grown up so it probably doesn’t hit me as hard as the younger drivers and other departments,” said Mr Dempsey, who lives in Co Dublin.

He acknowledges the difficulties that the rail strike will cause for passengers, but he hopes they will understand workers’ frustrations.

“The Luas drivers put up a good fight to get what they wanted but I just hope that our dispute doesn’t last as long. The feeling on the ground from staff is that this could very well take that form. If it’s not resolved after these initial five days, then it could escalate further,” he said.

“The worst case scenario for both the workers and commuters is that this ends up in an all-out strike coming up to Christmas.

“We apologise to all our customers for today’s strike but we cannot have a situation where workers are being underpaid,” he said.