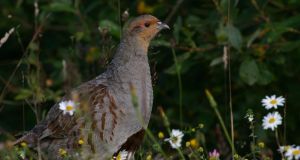 The partridge’s shift from ubiquity to extreme rarity is a textbook illustration of the intimate relationship between wildlife and farming practices. 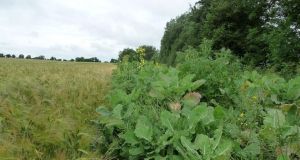 The courtship song of the grey partridge is rather harsh, to human ears at least. But its kierr-ik dialogue used to be as evocative of Irish summer nights on many Irish farms as the crex-crex of the corncrake, another almost vanished bird. Today very few of us ever get to hear a partridge in the wild in Ireland, but a new project may give us a chance to do so again.

A game bird, the partridge was once popular on the Irish rural table, but it vanished from most farms from the late 1960s, and is now reduced to a single viable breeding population, at Bord na Móna’s Lough Boora Parklands, in Co Offaly. Its survival there requires a lot of life support from the National Parks and Wildlife Service.

The partridge’s shift from ubiquity to extreme rarity is a textbook illustration of the intimate relationship between wildlife and farming practices.

Originally a bird of the open steppes, it benefited greatly from forest clearance and grain production. Traditional fallowing left it ample room to nest and raise chicks undisturbed. Kieran Buckley, an NPWS ranger working with the Irish Grey Partridge Conservation Trust, describes the bird as having followed the plough from Mongolia to Ireland.

The introduction of new farming techniques here in the 1960s deprived the partridge of food diversity and plant cover for its breeding habitat.

Since 2011, however, the partridge has been making a tentative return to north Co Dublin, thanks to an innovative partnership between three local farmers, Fingal County Council, the Grey Partridge Conservation Trust and the National Association of Regional Game Councils.

The farmers have agreed to leave a three-metre margin between their hedgerows and their crop cultivation. Laid end to end, this slimline biodiversity sanctuary is already 10km long.

Fingal council compensates the farmers with the full value of their lost crop, and their EU single farm payment for cultivated acreage remains unaffected.

Seventy-five partridges from Lough Boora were introduced in the first year, and, although the very wet summer of 2012 hit the project hard, at least 19 pairs bred last year, enough to justify hopes that the project can become self-sustaining.

Nevertheless, the numbers will continue to be boosted over five years from a captive breeding programme managed by a local gamekeeper, Derek O’Brien. He raises up to 10 partridge coveys – families – a year, using a mix of partridges and bantams as parents and surrogate parents.

Hans Visser, Fingal’s energetic biodiversity officer, is one of the driving forces behind the scheme, which he hopes will be replicated through the national farming-for-conservation projects due to be announced shortly. It epitomises the idea that very small changes within industrial farming can make a big difference to biodiversity.

Visser also believes that engaging the community is vital. This engagement ranges from raising awareness in schools to showing local people with the necessary space how to raise partridge chicks for release.

Out along the headlands the reintroduced partridges, both adults and chicks, face many threats from predators, which O’Brien attempts to control with the help of a small arsenal of traps. These are often necessary for the restoration of an endangered species, to help the population grow to a sustainable level. Otherwise the very limited sanctuary of the headlands turns into a magnet for predators, which are attracted by the easy availability of the very species you are trying to protect.

O’Brien’s rare skills in dealing with the complex equations of predation are now part of any serious conservationist’s repertoire.

Meanwhile, recent research shows that some other species are benefiting from the partridge scheme. Declining farmland birds like yellowhammers share the seeds produced by the variety of plants on the headlands, and bats feast on the insects that are proliferating among them.

Pat Rooney, who has a large cereal farm, has embraced the scheme warmly. He enjoys the knowledge that they are breeding on his family’s land once more.

There are other benefits for farmers. Plants like chicory, fodder radish, mustard, linseed and kale have been seeded into the headlands. They give cover to the adult partridges and attract the insects that the chicks eat for protein while fledging, or feathering up.

Along with native grasses, they form quivering swathes of green, olive and silvery grey against the golden backdrop of a field of barley. Rooney agrees that this small change has greatly enhanced the beauty of his fields.

He has discovered an unexpected economic gain as well. Aphids, those tiny insects that suck the lifeblood out of garden plants like roses, are also a major pest in monocultural cereal fields. When no other plant species are around to host the aphids’ predators, their population explodes, destroying up to half the crop.

The new headlands, however, are nurseries for dozens of insect species that feed on aphids. Rooney has noticed a significant reduction in aphid damage already where the marginal vegetation has been restored. If his experience is repeated elsewhere, partridge restoration could become a flagship project nationally for the agrienvironmental scheme proposed under the EU’s new rural-development programme.