For grey squirrels the Shannon remains a swim too far

They occasionally cross the river but stick mainly to the parts of Ireland to its east. What’s going on? And where does that leave red squirrels? 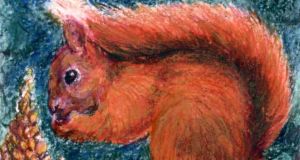 Fighting back: the red squirrel is now in all 32 counties. Illustration: Michael Viney

My first grey squirrel was scampering up a sidewalk tree in the heart of imperial Washington, a sight of no apparent novelty to anyone else. My second was gathering spilt popcorn on a walkway of London Zoo, enjoying casual liberty among acres of captive animals and birds. Sciurus carolinensis, it seems, has never known its place.

This far west of the Shannon I now live remotely from the bark-stripping invasion of the American greys in Ireland, and as for spotting a red I’d stand a better chance around Killiney, Howth or Sandyford than here on the bare coast of Mayo.

The ebb and flow of native and interloping rodent continue, however, to make absorbing news.

The spread of the American grey squirrel is of wide concern in Europe, not merely on this island and in Britain. In northern Italy, for example, the squirrels were introduced only in 1948. By 2010 a gift of four from the US ambassador had multiplied to cover more than 2,000sq km of Piedmont.

In more than half that area the native reds have been wiped out, many by the squirrel-pox virus carried, without visible self-harm, by the greys. Italian scientists have warned that if the grey population is not contained it will spread to France and Switzerland within decades and, eventually, to much of Eurasia.

Even without the deadly pox, only recently apparent in Ireland, the greys outcompete the reds for food in deciduous and mixed woods, leaving them a bit gaunt and less able to breed successfully.

Once infected with the pox the reds can rapidly die of symptoms like those of the rabbit plague myxomatosis, and this can hasten by 25 times the speed of their replacement by greys.

Our red squirrel, Sciurus vulgaris, is considered a native, all but lost by the 17th century in the felling of the island’s forests, and replaced or augmented by several later reintroductions from Britain.

The greys were brought in, now notoriously, in 1911 by the duke of Buckingham, who thought that eight would make a nice wedding present for the daughter of the house at Castleforbes, in Longford, just east of the Shannon.

An island-wide survey in 2007 showed that expansion of the greys had reached the entire eastern coastline, all counties of Northern Ireland, moving into Donegal, Waterford and Limerick, and nearing the northeast border of Co Cork.

But it also showed the first signs of a new phenomenon: an unexpected rarity of grey squirrels in Cavan, Laois and Offaly. “Anecdotal reports” hinted at a possible reason: the continuing resurgence of the predatory pine marten.

A later study of this population crash by Emma Sheehy and Colin Lawton of NUI Galway found some 9,000sq km of the midlands where both martens and reds are now common and widespread – this for the squirrels after an absence of 30 years.

In the woods of Charleville, Co Offaly, for example, there are now three or four adult martens per square kilometre, coexisting with red squirrels at their normal density.

This was the first documented evidence of any grey-squirrel population crashing without human intervention, such as trapping or shooting, once established as an invasive species. The pine marten rarely attacks reds, which spend their lives in trees (unlike the ground foraging of the greys) and which, being smaller, lighter and more agile, can retreat, perhaps mockingly, to the tips of slender branches. The very presence of the martens, on the other hand, can disrupt the security and breeding of the greys.

The Irish experience has aroused great interest among conservationists in the UK and Europe. In England and Wales the pine marten is virtually extinct from habitat loss and persecution, and the grey squirrel reigns supreme. In Scotland, however, the martens are expanding their range, and a Scottish biologist, Emily Goldstein, joined the Irish team for the latest squirrel survey, just published by the National Parks and Wildlife Service.

This notes a very high number of pine-marten sightings in 2012, with the animal now in every county except Derry. And while greys continue to press on at the edges of their range, red squirrels are reported from all 32 counties, if still rarely from Meath, Louth and Carlow.

The crash of the greys elsewhere in the midlands helps relieve the pressure on the Shannon as a barrier to their expansion into the west. At several stretches along the river, however, the tree branches meet overhead, and the greys can also swim. A 2007 survey led by Michael Carey noted crossings on several occasions in north Roscommon and Leitrim, but these led to no further spread west, perhaps for lack of welcoming habitat.

Yet another survey, focusing on the west and led by Margaret Flaherty of NUI Galway, has received wide public help. It confirms that, despite rare sightings of greys on the wrong bank, the Shannon generally remains a swim too far.