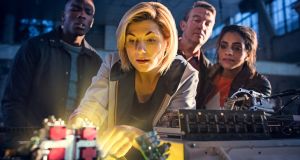 The BBC makes some channels, such as BBC Entertainment featuring hit series ‘Doctor Who’, available in various EU states

The BBC is in talks with Irish and Dutch authorities to obtain licences allowing it to continue broadcasting across the European Union in the event of a no-deal Brexit, according to two people familiar with the matter.

The UK licences that the taxpayer-funded BBC uses to operate its channels in other EU countries will no longer be valid if the UK leaves without a withdrawal agreement in place.

UK prime minister Theresa May is struggling to get the UK parliament to support her deal with the EU that would prolong current broadcast licensing arrangements for two years while the UK negotiates a new relationship with its biggest trading partner.

The BBC is yet to make a final decision on international broadcast licences, said the people, who asked not to be identified as the discussions are confidential.

International media companies that have regional hubs in Britain, such as Discovery and Comcast’s NBC Universal, have also applied for broadcast licences elsewhere in the EU to safeguard the transmission of their channels on the Continent.

“The BBC have a big problem,” said David Justin, president of One Six International, a media advisory firm based in Amsterdam. “If it’s a hard Brexit, they would face a blackout in some countries.”

A BBC spokesman said the organisation would keep the situation “under close review to ensure that we can continue to best serve our audiences in any changed regulatory environment.”

Representatives of the Dutch and Irish media regulators had no immediate comment.

As many as 500 channels based in London use a licence from UK regulator Ofcom as a “passport” to broadcast services aimed at audiences in other EU markets.

Only one licence from an EU regulator is required for each service, meaning there is an opportunity for the State to entice some of the London-based broadcasters to set up hubs in the Republic.

The Broadcasting Authority of Ireland (BAI) said last month it had received its first application for a section 71 broadcasting licence as a result of Brexit, but declined to identify the applicant.

BAI chief executive Michael O’Keeffe said it had held “one-to-one meetings” with several broadcasters and indicated the regulator would examine contingency plans in the new year if it looked like existing licences might be invalidated overnight.

European pay-TV satellite company Sky, now majority-owned by US cable giant Comcast, recently urged the channels it carries to ensure they still have an EU licence after Brexit.

Through its commercial arm BBC Studios, the BBC makes some channels available elsewhere in the EU, such as BBC Entertainment, which carries re-runs of shows such as science-fiction series Doctor Who and the factual shows Bargain Hunt and Antiques Roadshow.

The BBC generates hundreds of millions of pounds of revenue from EU markets, according to the UK’s telecommunication regulator Ofcom.

EU rules say broadcasters need to have their head office, a significant part of their workforce or a satellite up-link in the country to qualify for a licence there, a requirement that could see the BBC move some staff and operations into the EU.

Adam Minns, executive director at the UK’s Commercial Broadcasters Association, said the expansion of international channels has been one of the biggest drivers of economic growth and employment in the UK television industry.

“But going forward, if the UK cannot grant an international channel a broadcasting licence that is recognised by other countries, it is going to be very hard to sustain that growth in the medium to long-term,” said Mr Minns, who declined to comment on the BBC’s situation. – Bloomberg/additional reporting: The Irish Times