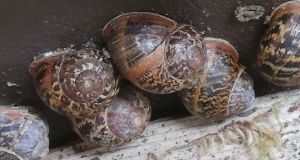 Will I wake these sleeping snails?

On removing wood in the woodshed I discovered this cluster of snails. I hope exposing them to the light does not wake them prematurely from hibernation.
– Gerry Wheeler, Kilshannye, Co Clare
I don’t think you need worry about them. They also hibernate in the open.

My granddaughter found this on the beach. What is it?
– John Suttle, Blackrock, Co Dublin
It’s called a mermaid’s purse and is the egg case of the lesser spotted dogfish.

Of the 64 swans I recently counted in Bray harbour, 14 were first-year birds and three bad angel wing. The consensus is that this is caused by unbalanced feed. The swans are mainly hand-fed. – Paddy Demery, Bray, Co Wicklow

On the beach at Fenit I found this golf ball which had been so long in the sea that kelp used it as an anchor. – Norah Blandin, Tralee, Co Kerry
Some brown kelps attach to cobbles and pebbles and so are not firmly anchored.

Is this a kestrel that visited my window recently? – A Keogh, Oughterard, Co Galway It is indeed.

Over the summer we regularly found crabs in the rock pools at Seapoint, Co Dublin. However, recently we couldn’t find them.
– Aoife, Grace, Ferdia and Leah Nic Mhathúna, Blackrock, Co Dublin
Common shore crabs may disappear from rock pools for many reasons. They can move out to sand or mudflats when the tide is in, or be swept out by storms. And females may disappear to lay eggs in a safe place.

This barn owl was a recent daytime visitor to our garden.
– Rod Tuach, Ashford, Co Wicklow

This crocus was growing wild on a roadside at Garfiney on January 5th.
– Nuala Lynch, Dingle, Co Kerry