Epic whaling voyage by Crawford Hartnell to be recreated 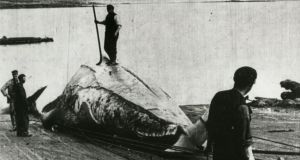 A historic image of the harpooning of whales off the Co Mayo coastline. Some 690 whales were killed between 1908 and 1914.

Just over a century ago, an Irish Times correspondent took to sea to record a graphic description of harpooning whales off the Co Mayo coastline.

Crawford Hartnell lived what one of his colleagues later described as a “ Moby Dick sort of life” , enjoying “capital delicacies for hungry gentlemen”, which included whale meat on board a Norwegian steamer.

Now, 103 years later, the voyage he wrote about in this newspaper in January 1910 is to be recreated – but with a sole emphasis on counting rather than killing the fragile species.

The Irish Whale and Dolphin Group (IWDG) research cruise later this spring will take place on board the Celtic Mist , which has been refurbished since it was donated by the family of former owner Charles J Haughey.

It will follow the track of Hartnell’s voyage from the Inishkea Islands, where one of two Norwegian whaling stations had been established, to a point some 160km (100 miles) west, where the writer described two whales being harpooned.

In the early 20th century, more than 800 great whales migrating north along the continental shelf edge were caught off the north Mayo coastline by Norwegian-Irish interests before the industrial practice was banned.

Some 690 of the mammals were killed between 1908 and 1914, with 63 per cent being fin whales. Blue and sei whales, and smaller numbers of humpback, right and sperm whales, were also taken.

In Hartnell’s enthusiastic and detailed account, he described witnessing a barb from a harpoon gun striking one whale between fin and eye, “tearing open a mighty wound”.

A second whale was chased for some nautical miles, “spouting aloft torrents of blood and vapour”, before it was winched in, weak and exhausted.


‘Booty in tow’
“Within 36 hours of leaving Broadstone, Dublin, we had assisted at the killing of two whales, and with our booty now in tow we were homeward bound,” he wrote.

“The blessing the fishery has been to these poor islands cannot be overestimated,” he noted, of the impact on the Inishkeas. He even asked the views of an “intelligent islander” about the economic benefits.

The IWDG cruise will look for baleen and beaked whales. Members on board will learn how to identify different species, how to carry out a survey, and how use a hydrophone to detect whales and dolphins.

It has recorded 21 species of whale and dolphin off the Mayo coast, with several of these being endangered, including the northern right, the blue, fin, sei, humpback and sperm whale.