Dublin Metro may require homes to be demolished 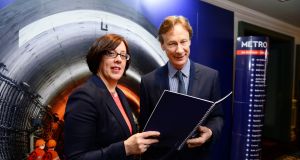 Anne Graham and Peter Walsh of the NTA: Metro will run every two minutes from Swords to Sandyford, serving the airport and city centre. Photograph: Cyril Byrne

More than 100 properties, including gardens and houses near Dartmouth Square in Ranelagh, and a city centre apartment block, may have to be acquired and demolished to facilitate the new Metro Link rail line due to open in 2027.

The preferred route of the line, which will run every two minutes from Swords to Sandyford, serving Dublin Airport and the city centre, has been made available for public consultation from now until May 11th, ahead of an application to An Bord Pleanála next year. The line is due to open in 2027.

The 26km route, 12km of which will be underground, will combine the previously planned Metro North from Swords to the city centre, with an upgrade of the Luas Green line between Charlemont and Sandyford to carry the Metro on a fully segregated line.

The line will start above ground north of Swords at Lissenhall west of the M1 motorway, and will run on a elevated line through Swords to Fosterstown, where it will run into a new tunnel to Dublin Airport.

The line will continue underground to Ballymun, and Glasnevin, connecting with mainline rail at a new station to the west of Cross Guns Bridge, and on to the city centre, serving the Mater hospital, O’Connell Street and Tara Street station.

From Tara Street, it will continue underground to the east side of St Stephen’s Green, the opposite side of the park to the existing Luas line, before continuing to the Charlemont Luas stop, where it emerges on to a surface level line to Sandyford which will be segregated from the Luas line. Metro services will terminate at Sandyford, with a Luas running to Brides Glen.

In addition to its extension with the upgrade of the Luas line from Charlemont, Metro Link differs significantly from the old Metro North in two ways: the line will run from Ballymun to Glasnevin instead of Ballymun to Drumcondra, and the St Stephen’s Green stop will be at the east side of the park under the roadway, instead of the west side under the park.

Aidan Foley of Transport Infrastructure Ireland (TII) said the Glasnevin route offered the possibility of interchange with two rail lines, while the use of St Stephen’s Green East would have “significantly less impact” on the park.

However, many property owners along the line can expect significant disruption and even loss of their homes and lands to facilitate the Metro.

In the city centre, 70 apartments at the College Gate complex next to Tara Street station could face demolition if the preferred route went ahead.

In Ranelagh, houses on the west side of Dartmouth Square stand to lose parts of their back gardens, while two houses on Dartmouth Road may require demolition.

“There are about 100 properties over the entire length which are potentially affected,” Mr Foley said. “It would be our policy to try and engage with all of the affected properly owners at the earliest possible point to make sure we try to mitigate where we can, and reach fair and equitable arrangements with them in relation to their properties.”

Construction is expected to start in 2021 and to take six years.

Some sports clubs will also find their lands required as part of the route. Na Fianna GAA club and Home Farm football club in Glasnevin would see parts of their pitches required during the construction phase of the Griffith Park station. It is not yet known if the clubs would face any permanent restrictions or losses of land.

Luas Green line users will also face disruption during the construction works, and those using the line to travel from northside to southside suburban areas will no longer have a direct journey but will have to change from Luas to Metro at Charlemont.

Details of public consultation meetings over the coming weeks are available at metrolink.ie.