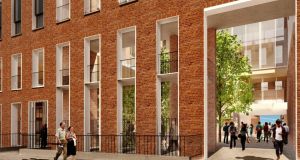 Dublin city councillors are being advised by management to amend the city plan to facilitate a controversial scheme by the ESB to redevelop its headquarters in Lower Fitzwilliam Street.

As currently cast, the Dublin City Development Plan 2011-2017 included a specific provision – inserted at the insistence of councillors – requiring reinstatement of the facades of 16 Georgian houses demolished by the ESB in the 1960s.

In order to be able to submit a planning application for the neo-Georgian scheme designed by Grafton Architects and OMP, the State-owned company must first secure a “variation” of the city plan so that it can be considered by the planners.

The proposed wording would “promote an exceptional urban design and architectural response in relation to any proposed redevelopment of the ESB headquarters site” which respected and enhanced the character of the Georgian streetscape.

It specifies that this should include “the rhythm of windows and doors . . . parapet height, the quality and craft of material and finishes (including brickwork), the relationship with the public realm [and] the way by which the building holds the Georgian street line”.

In a report to councillors following a period of public consultation, executive manager Jim Keogan says the requirement to reinstate the missing facades “is considered to be excessively rigid” and would not necessarily achieve long-term sustainability.

“The reinstatement of facades is not generally regarded as good urban design practice, as it undermines the accepted principle that form should relate to function and also diminishes the integrity of the original buildings” says the report, to be considered today.

It says the existing building “although less than 50 years old, does not meet current sustainable energy standards, nor is it sufficiently adaptable for modern 21st century office requirements”. Its deteriorating pre-cast panels have also had to be painted over.

A total of 67 submissions were received by Dublin City Council regarding the proposed variation. Those who favoured a more flexible approach included the ESB itself, the Royal Institute of the Architects of Ireland and Dublin Chamber of Commerce.

Most favoured retaining the current objective of reinstating facades of the 16 missing houses or reconstructing them entirely. “It would seem that a large number of these objections have been copied from an original template and signed individually,” the report notes.

If the variation is adopted by the city council today, it would then be open to the ESB to lodge a planning application for the proposed redevelopment. No commitment has been made at this stage to approve the project, which currently includes no residential units.