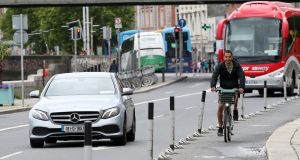 The wands or lane separators, which will include barriers up to 1m tall, are expected to cost more than €100 each. Photograph: Laura Hutton

Dublin City Council is to spend up to €2.5 million on traffic wands to protect cyclists from “sideswiping” by motorists.

The wands or lane separators, which will include barriers up to 1m tall that deter vehicles from entering the lane, and 40cm high “bounce-back wands” which can be driven over if necessary, are expected to cost more than €100 each.

Last April the council began a programme of installing barrier wands to create new segregated cycle lanes on the Liffey quays, and to protect existing lanes around the city from encroachment by motorists.

It also used the barriers to reallocate parking spaces outside a small number of shops to pedestrians, mostly in locations where footpaths were narrow, to enable social distancing, particularly in areas where queuing was likely. The wands are also being used in some locations where illegal parking on footpaths is prevalent and causes access problems for pedestrians, particularly those with mobility difficulties.

The council has also received a large number of requests for additional space to be allocated to pedestrians and cyclists around the city, including large numbers from businesses. However, due to the increasing use and demand for barriers, it has had difficulty sourcing sufficient wands to meet requirements.

It is now planning to put in place a 12-month contract, which may be extended up to 2023, at a cost of up to €2.5 million. This year alone, the council said it could potentially spend €500,000 on 4,000 short and tall wands including base units to attach them to the roadway, and 500 separate wands or bases.

The council has been installing additional wands in recent days in the streets surrounding Grafton Street, several of which will be pedestrianised this weekend and on the three following weekends.

Businesses that have already applied to the council for permission to put tables and chairs outside their premises will, if they have been granted permission, be allowed to use the roadway, but all existing footpaths are to remain clear of “street furniture and obstructions”, the council said. Disabled parking spaces will be relocated to adjoining streets and access to all public car parks will remain open.