Police take all crimes seriously including shooting, poisoning or trapping of wildlife 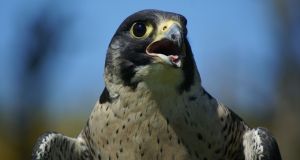 In recent years dozens of birds such as buzzards, red kite and peregrines (above) have been killed in Northern Ireland.

The PSNI said on Monday it was availing of the latest technology to help prevent and combat wildlife crime.

“Small Unmanned Aircraft (SUA), more commonly known as drones, have been used recently to monitor ‘hot-spot’ areas where crimes against birds of prey are occurring,” police said in a statement.

“This supports the work of officers in the districts, who investigate all instances of wildlife crime,” they added.

In recent years dozens of birds such as buzzards, red kite and peregrines have been killed in Northern Ireland.

Detective Inspector Stephen Brown said he understood the PSNI was the first police force in Britain or Northern Ireland to use drones to tackle wildlife crime.

“We are pleased to be able to effectively target hotspot areas and areas further afield as and when required so we can work with our partners in the hope that we can all prevent this type of crime and reach our ultimate goal to combat wildlife crime,” he said.

Emma Meredith, the PSNI’s wildlife liaison officer said police “take all types of crimes seriously and this includes wildlife crime such as shooting, poisoning or trapping of birds of prey”.

She said that on occasion poison such as Carbofuran had been used as bait on sausages or rabbit carcasses to attract birds such as buzzards and red kite.

“Be under no illusion that this type of poison is an indiscriminate killer and can also be fatal to humans,” warned Ms Meredith.

Carbofuran was banned across the EU in 2001.

A report into the illegal killing of Northern Ireland’s native birds of prey, published by the Partnership for Action Against Wildlife Crime in November 2016 found there were nine confirmed illegal poisoning or persecution incidents, affecting 11 protected birds of prey in 2014.

Between 2009 and 2014 there were 44 confirmed reports of birds of prey being illegally killed, plus one confirmed incident of illegal nest destruction. The birds mainly targeted were buzzards, red kite, peregrines and sparrowhawks.

Of the nine confirmed cases in 2014, four occurred in Co Down, two in Co Tyrone and one in each in counties Derry, Armagh and Antrim.

The Northern Ireland Raptor Study Group peregrine survey praised the initiative. “We welcome the fantastic cutting-edge PSNI initiative using this technology locally especially since we lose a number of peregrines each year, particularly to illegal poisoning or shooting and trapping,” it said in a statement.