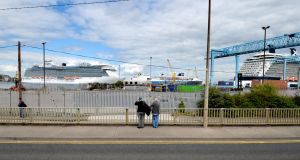 Dublin Port Company is currently renewing its master plan which will govern the development of the port until 2040. Photograph: Alan Betson

Dublin Port Company has ruled out the use of any of its lands for the development of a film studio, following a review of public submissions on the future of the port.

The company is in the process of renewing its master plan which will govern the development of the port until 2040.

The plan was originally published in 2012, after An Bord Pleanála refused permission for plans to infill 21 hectares (52 acres) of Dublin Bay to expand the port’s lands.

In 2012, the company said a return to the infill expansion project would be required to provide the capacity necessary for growth to 2040. However, in a draft of its new masterplan, published last January, the company says it does not plan to revisit the land reclamation project, and sought the public’s views on the future of the port.

A number of submissions raised concerns over overlapping development proposals on the Poolbeg peninsula, where Dublin city council is seeking to develop 3,500 apartments, and the potential for additional noise and air pollution.

However, the company said, there was no public support for a film studio on port lands.

“There were no third party submissions advocating the development of a film studio on port lands in the Poolbeg Peninsula.” However, a separate public consultation on the Poolbeg West Special Development Zone has heard from a significant number of supporters of the plan led by former Windmill Lane film executive, James Morris to build an 18-acre film studio owned by Dublin Port.

The promoters of the studio plan, Dublin Bay Studios, had lodged a submission seeking to locate a studio “in the port estate” the Dubin Port Company said, but the submission “provided no detail or information on how their proposed project could be reconciled within the context of the issues identified within the Masterplan Review Paper”.

As a result, the company would continue to use these lands for “core port purposes as an alternative to additional infill proposals” it said.

However, the studio could still be located in the peninsula area. While the council said its focus is on developing homes, it would explore the opportunity for a studio within the planned strategic development zone.

In a report on the public submissions, the company said there was strong support for closer integration between the port and the city, as well as better connectivity between public transport services in the north port area and the ferry terminals.

Councillors will this week agree the planning framework for the new zone, which will allow developers to seek permission that cannot be appealed to An Bord Pleanála.