Another weekend of sunny skies and warm weather ahead

Temperatures expected to rise over the weekend, reaching 20 degrees by next week 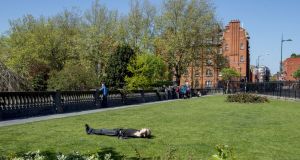 The sunny skies and warm temperatures are set to stay over the weekend with Met Éireann predicting mainly dry conditions in the coming days.

There will be light westerly breezes and some heavy downpours in the afternoon but these will clear by evening.

There will be similar conditions on Saturday but temperatures will begin to rise on Sunday bringing highs of 18 degrees and warm, humid weather.

The cloud will increase on Sunday morning and bring some scattered outbreaks of rain and drizzle to Munster, Connacht and north-west Ulster.

However, most of the country will remain dry during the afternoon with some patchy mist and light rain.

Sunday’s warm, humid conditions are expected to continue into Monday with highs of 17 degrees, according to Met Éireann.

Tuesday will remain bright with good sunshine and a few passing showers while temperatures will rise to 20 degrees by Wednesday.

The pattern of exceptionally dry weather which was recorded last month has continued into May causing drier land and leading to the recent spate of gorse fires around the country.

It is estimated the fires, which caused damage in Co Dublin, Co Cork, Sligo and Co Roscommon as well as many other parts of the country, will cost the taxpayer tens of millions of euro in damage as well as ancillary costs such as environmental, health and tourism impacts.

Since the start of the month, many areas have had little or no rain, with 10 per cent of normal rainfall levels for this time of year in some places.

Parts of the country reported the driest April in more than 40 years with mild and settled weather across most of the State, according to Met Éireann.

Rainfall across the State was some 25 per cent of normal last month.

Mullingar reported its driest April since the station opened in 1950 with just 14.1mm of rain.

The majority of stations across the State reported their driest conditions for between nine and 44 years.