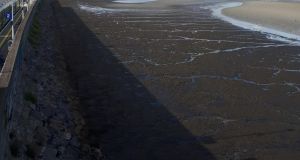 The decline of carbon-capturing seagrass, evidence of sea level rise caused by climate change, and major structural faults in coastal defences are among key initial findings of the 2019 Coastwatch Ireland survey.

The survey found “a dramatic decline” in marine litter, though there is evidence of encroaching aquaculture on coastlines, which is often illegal and brings plastic litter.

The presence of wet wipes arising from sewage outfalls and storm water overflows discharging into marine waters have also been frequently highlighted in more than 500 surveys conducted by citizen scientists in recent weeks.

Some “urgent action matters” mainly related to “structural faults in coastal infrastructure”, due to a combination of sea level rise and storms, found as part of the survey were reported to relevant bodies, Coastwatch director Karin Dubsky confirmed.

The decline of seagrass, “which is perhaps the most important carbon sink in our marine areas” is especially worrying, she said. This has been pronounced in Dublin Bay. Seagrass there was “highly stressed” this summer with temperatures of over 30 degrees found in coastal mudflats where it lives.

Surveyors were asked to look out for “dwarf seagrass”, known as zoostera noltii, as Coastwatch fears “all beds outside Sandymount Merrion gates and in Malahide estuary” are at risk.

“This grass looks like a wet lawn lying mid shore. It is a very important carbon sink, holds sediment together and is a Brent goose treat. So even small patches are valuable,” noted Coastwatcher Rita Hagan who is studying the grass.

A brown-coloured opportunist algae – ectocarpus – has invaded the ecosystem. It reduces light and impairs the ability of seagrass to thrive and generate oxygen. Enrichment of the water due to run-off from the land and sewage discharges is also upsetting the biological balance as it causes dense growth of plant life of the wrong kind.

Coastwatch is particularly keen on locating long seagrass, zostera marina, along the west coast as they are important fish nurseries.

Inch river in Co Wexford is seeing the effects of sea level rise more than most, with the sea encroaching on the estuary, the organisation said.

On a happier note, a new honeycomb Sabellaria reef found by Mike Berry on the Wexford coast opposite the Keeragh islands “has just been verified and proudly extends the known honeycomb reef range in Ireland further east than previously known”.

Green MEP Grace O Sullivan has secured exhibition space in the European Parliament’s Brussels base to showcase their work as part of an international Coastwatch exhibition planned for May 2020, Ms Dubsky added.

As storm and heavy rain episodes have cut into survey days, the survey has been extended until October 21st and Coastwatch is also looking for extra volunteers. More information is available at www.coastwatch.org.

The shore survey, supported by the Marine Unit of the Department of Housing and Local Government, is in its 32nd year and was started by Ms Dubsky and journalist Frank McDonald with the support of The Irish Times. The EPA’s new citizen science web pages provides open access to all data collected.