Settlement between Dublin City Council and developers will enable redevelopment 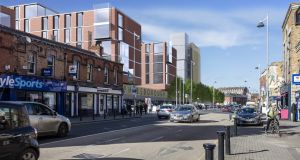 A deal to clear the way for the redevelopment of Phibsborough shopping centre, and neighbouring Dalymount Park stadium has been struck between Dublin City Council and developers.

The €50 million revamp of the centre, often ranked as one of Dublin’s ugliest buildings, was approved by An Bord Pleanála in August, but questions remained about ownership of a plot between the centre and the stadium.

The council bought Dalymount, which sits directly west of the shopping centre, from Bohemians Football Club for €3.8 million in 2015. It plans to build a new stadium and have Bohemians and Shelbourne as tenants.

City councillors were this week told that a “settlement” had been reached with the developers, MM Capital, headed by Derek Poppinga and Peter Leonard, to allow both projects go ahead.

The developers will pay the council €40,000 for the plot of land and build a public plaza between the centre and the stadium.

Dublin City Council wants to turn Dalymount into a €20 million, 10,000-seater stadium and plans to seeks funds from the Department of Sport before the end of April.

The existing stadium was first laid out a century ago. The pitch will be laid out on a north-south alignment, rather than east-west, as it is currently, to ensure better light and to prevent matches being affected by sunsets.

Work is due to finish in 2022. Retail space in the centre will be tripled, along with a seven-storey-high student accommodation block.

However, the eight-storey 1960s concrete tower cannot be demolished because the developers do not own two of the businesses underneath it: a Tesco supermarket and an Eddie Rockets restaurant. These, and a Tesco off-licence nearby, will remain as they are.

Instead the tower will be clad with a metal mesh. Apart from the eight-storey tower, most of the centre today is a one-storey strip mall, topped with car parking.

The developers plan to build up the site with heights ranging from three to seven storeys, including new shops, offices, restaurants and student accommodation.

Dublin City Council has long wanted to redevelop the properties that form the heart of Phibsborough village, drawing up a plan in 2008 to create a new “village centre”.

Bohemians had at the time planned to sell Dalymount and move to a green-field site close to Dublin Airport. However, the plan collapsed when the economy crashed.