Chancellor advises lockdown could last until April, according to Bild newspaper 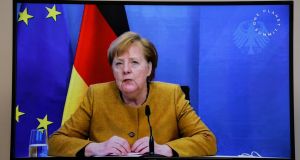 German chancellor Angela Merkel speaks during a video conference at the One Planet Summit on Monday. Photograph: EPA

German chancellor Angela Merkel has told politicians in her conservative party that she expects a lockdown in Germany to curb the spread of the coronavirus to last until the start of April, top-selling newspaper Bild daily cited participants at the meeting as saying.

“If we don’t manage to stop this British virus, then we will have 10 times the number of cases by Easter. We need eight to 10 more weeks of tough measures,” Bild quoted Ms Merkel as saying.

Three participants of the meeting told Reuters that Ms Merkel had not explicitly spoken of an extension of the lockdown until April and that she had not warned of a ten-fold increase in infection numbers in Germany.

“Merkel said the coming eight to ten weeks would be very hard if the British variant spreads to Germany,” one of the people said, adding the chancellor had referred to a tenfold surge in infection numbers in Ireland due to the new variant.

Germany had tightened a national lockdown last week and extended it until the end of January amid fears that the more transmissible variant of the virus first discovered in Britain may put additional strain on struggling hospitals.

On Tuesday, the Robert Koch Institute (RKI) for infectious diseases reported 12,802 new coronavirus cases. The Covid-19 death toll rose by 891 according to the RKI, bringing the overall total of deaths to 41,577.

Europe’s largest economy aims to be able to limit the spread of the virus until enough of its population has been vaccinated to achieve herd immunity.

The premier of the southern state of Bavaria, Markus Söder, called for a discussion on introducing obligatory vaccinations for nursing home staff as many of those working in homes did not plan to get jabs against Covid-19. – Reuters