Controversial Howth development gets go ahead

An Bord Pleanála has approved 164 apartments close to Martello Tower 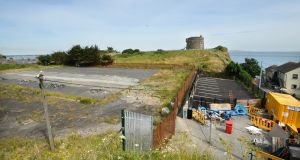 Site at Howth where a proposed housing development, in an area beside the Martello tower, has been given planning permission. File photograph: Dara Mac Dónaill

A controversial development in the fishing village of Howth in Dublin has been given planning permission by An Bord Pleanála.

The decision will see the construction of 164 apartments on a site overlooking Howth harbour and the surrounding coastline, and close to the village centre and the nearby Martello Tower.

Local residents had objected to the plan citing concerns including local subsidence.

The application was brought by developer Crekav, which recently had separate plans for a development beside St Anne’s Park in nearby Raheny overturned following judicial review proceedings.

That course may now be considered by objectors to the Howth development, which, similarly to the St Anne’s scheme, was brought under strategic planning laws that allow applications bypass local authorities and proceed directly to An Bord Pleanála.

The decision was announced on Wednesday and a public meeting is due to be arranged for next week by local Labour Senator Aodhán Ó Ríordáin who has been to the fore in opposition of both developments.

“The only recourse available to the residents is to seek a judicial review,” he said following the decision, adding that he expected one would be pursued. However, grounds for such a legal challenge would have to be found.

“It’s a derelict site and I was expecting that a residential development of sorts would be given permission there but I do think that the subsidence issue remains unresolved by An Bord Pleanála.”

Those concerns relate to plans by the developer to remove thousands of tonnes of sand from the site, in an area that has a history of landslides.

Objectors had outlined their fears that the construction of apartments could have knock-on effects for a village that has already seen parcels of nearby land collapse. They have claimed the proposed site works would require in the order of 5,000 truckloads of material to be excavated.

Others are worried about the potential aesthetic impact on the village, a favourite with tourists.

The application includes the demolition of the former Baily Court Hotel on Main Street, which has been derelict for years. Three blocks of apartments would rise to four storeys; there will be underground parking and 757 square metres of retail and commercial space.

The Marlet Property Group, which owns Crekav, previously told The Irish Times the plans would “contribute to resolving Dublin’s chronic housing shortage” and that extensive surveys of the site had been conducted to assess “all potential impacts”.

“We understand that there will be concerns about any development in this outstanding location. We believe our plan will make a significant positive contribution to Howth and the surrounding area,” a spokesman said.

In publishing its decision, An Bord Pleanála said it had taken numerous factors into account including the location of the site within the village, the local development plan and the 2016 Rebuilding Ireland Action Plan for Housing and Homelessness.

The nature and scale of the plans as well as several design guidelines and local concerns were also taken into account, it said.