Storm Ali: Woman who died in caravan was visiting from Europe 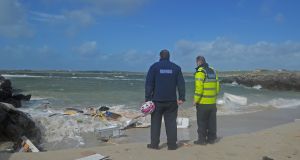 Gardaí from Clifden Garda station survey the wreckage from the caravan that was washed into the sea at Claddaghduff. Photograph: Conor Mc Keown

A woman has died after the caravan in which she was staying was swept off sandy banks onto a beach at Claddaghduff, Connemara in violent storm force 11 winds earlier this morning.

The woman, who was in her fifties and visiting the area from Europe, was on her own in the caravan at Acton’s beach when it was lifted by a strong gust sometime between 7.45 and 8am.

Emergency services were alerted, and efforts were made by the Irish Coast Guard, gardaí and Galway Fire Brigade to remove the caravan from the tideline. The body of the woman was recovered on the beach close to the caravan, which was substantially damaged.

Her body is still at the scene and gardaí have said it will be taken to University Hospital, Galway for a post mortem.

The violent storm force 11 winds which recorded speeds of 143 km per hour at Mace Head caused major disruption across the country with fallen trees closing roads.

“As President of Ireland, may I express my deepest condolences to her family. I would also take this opportunity to pay tribute to all those, in statutory and voluntary organisations around the country, who are helping and stand ready to assist their fellow citizens, and who are working to maintain essential services around the country.”

1 Gardaí disperse crowds gathered at coastal beauty spots
2 Six counties free of new cases of Covid-19 over past week
3 Maureen Dowd: If Donald Trump no longer tweets, does he even exist?
4 US cities become battle zones as anger at racial inequality erupts
5 Catholic priests warn against any rush to reopen churches
Real news has value SUBSCRIBE

Looking past lockdown: Schools may reopen in July for children with special needs 03:05
Lockdown gives nature a chance to flourish at the Giant’s Causeway 03:00
Government formation talks hit serious pinchpoints 02:23
Carrier of O’Donnell flame waits as search for Red Hugh continues 01:35
Cabinet to decide on Friday if curbs on travel to be lifted a month early 00:51