Concern switches to flooding by rivers 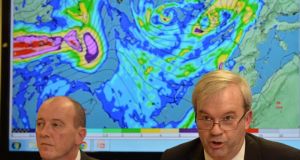 Concerns about the potential for widespread river flooding will be flagged to the Government today by the National Emergency Co-ordination Group, which comprises State agencies trying to cope with the floods.

A report by the group on the current situation and projections for the coming week is to be given to the Cabinet today by Minister for the Environment Phil Hogan.

The group met yesterday in Dublin for the first time in the current flooding crisis.

Fears have grown about the capacity of the Shannon to absorb the volume of water draining off surrounding lands and the possible impact of heavy rain expected over the next week.

“The threat from tidal flooding seems to be receding for the moment. We are concerned about the further threats that exist. . . An enhanced level of threat exists in rivers,” said Seán Hogan, chairman of the co-ordination group.

While not identifying which rivers, apart from the Shannon, are causing most concern, Mr Hogan said all major rivers were carrying above-average volumes of water at present and further rains were forecast.

The current situation did not constitute a national emergency, according to Mr Hogan, who commended the efforts of State agencies at local level and the high degree of co-operation between local people in trying to cope with flooding.

“While awful things have happened, it brings out the best in people at times like this.”

Yesterday’s meeting was an information-sharing and co-ordination exercise between key Government departments and State agencies.

It was attended by representatives from the Taoiseach’s office and several other departments, health authorities, the Garda and the Defence Forces, Civil Defence, the Coast Guard and local authorities.

Special concern
Liam Basquille, principal officer at the Office of Public Works, said the level of water in the Shannon was of special concern for the days ahead.

“It is a very flat river that doesn’t allow for the flow of water at a very rapid pace. So the Shannon is always on our radar as a potential threat for flooding. On the other main river systems, we are monitoring the situation very closely. We have a comprehensive system and network of river-level gauges throughout the country, and that information is publicly available on a website called waterlevels.ie

“All the main catchments are being looked at very closely [by the group] and some of those rivers, like the Blackwater and the Suir in the main urban centres like Clonmel, already have river defences in place and they are working,” he said.
Gerald Fleming, head of forecasting at Met Éireann, said rivers with the characteristics of the Shannon could take up to four weeks to drain water from start to finish. Rivers flowing short distances from mountain to sea, as in east Wicklow, for example, could flush excess water through their system with much greater rapidity.

Climate change
Mr Fleming said it was too early to say whether the current spate of rain and tidal surging was related to climate change.

“Weather is not linear; weather doesn’t necessarily move at a steady rate [of change] from A to B. We might see no changes in our climate for 30 years and then suddenly [there is] a step change into something quite different. We don’t know these things.

“We had a very quiet period through the first decade of this century but if you look back into the 1990s there were certainly comparable, or more severe, events. So we’re not looking at anything we haven’t seen before.”