The Irish Times view on the climate crisis: momentum for real action 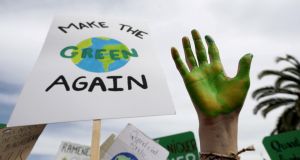 At last, there is tangible indication that if Irish citizens shout enough about the threat of climate breakdown, politicians will listen. Equally, it shows a non-violent global movement can sometimes hold sway over the grip of big corporations; notably in this case the fossil fuel industry. For too long they dictated energy policy when they were the worst form of climate science deniers – doing so when they knew of the escalating damage to the planet from their activities.

Environmentalist Bill McKibben put his finger on the imbalance in his latest book Falter: “The reason we don’t have a solution to climate change has less to do with the greed of the great, unengineered unwashed than with the greed of the almost unbelievably small percentage of people at the top of the energy heap”.

The latest sign of a major shift by the Government is in measures outlined in a draft version of its long-awaited plan on responding to “climate disruption”. They are radical, though they may not be sufficient because we are coming from such a low point – rising emissions, rampant energy inefficiency in buildings and intermittent progress in adopting renewable energy. They are to be reinforced by changes in governance, more ambitious targets, adoption of carbon budgets and taxes to prompt behavioural change.

The transition will be immensely challenging, especially in the decade up to 2030, because of the initial leap required. If carbon tax increases are not fairly applied, buy-in from the public will not be achieved.

The climate issue has forced its way to the top of political agendas. Candidates in the European and local elections are encountering outrage on doorsteps. Young people – tomorrow’s voters – are nudging their parents aside in asking candidates “what is your party doing to avert the climate crisis?” There is a bounce in recent polls for the Green Party but suddenly all parties are now for climate action.

The Government has also supported the declaration of a national climate emergency. The next logical step must be to commit to achieving net-zero emissions in Ireland by 2050. This means by mid-century any CO2 released into the atmosphere has to be countered by reductions elsewhere or use of technology to capture and store the greenhouse gas. Buying one’s way out by “carbon offsetting” would no longer be an option. This should also apply to aviation in Irish skies and shipping in our waters.

Then, we could say genuinely we are moving to become a global leader in responding to the climate crisis. It will deliver a revolution in every aspect of Irish lives, from how we power homes and travel to work to the food we buy – and help give the Earth a chance of staving off catastrophic global heating.

1 Drug dealer loses codes for €53.6m bitcoin accounts
2 Anti-Irish bigotry in Britain has not gone away
3 Would you kill one person to save five? Depends if you’re a millennial or not
4 Ben Affleck: ‘It took me a long time to admit I am an alcoholic’
5 ‘IRA has gone away’: McDonald responds to Garda Commissioner’s comments
Real news has value SUBSCRIBE