To access fund, EU states must prepare plans for transition and furnish details of actions 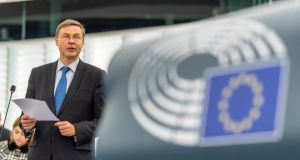 European Commission’s Valdis Dombrovskis: EU must put “our money where our mouth is” in terms of climate targets for 2050. Photograph: Patrick Seeger

The EU will mobilise investment of €1 trillion over 10 years in its European Green Deal to transform its economy to net-zero CO2 emissions by 2050, the EU Commission has announced.

The deal was endorsed in principle by EU leaders at their December summit and will be mainstreamed into every part of the commission’s work. Commission president Ursula von der Leyen says it is determined to demonstrate global leadership on the climate change issue. It’s a question of “putting our money where our mouth is”, commission vice-president Valdis Dombrovskis says.

The broad framework of spending proposals, including a major programme aimed primarily at heavily coal or carbon fuel-dependent states such as Poland, was approved by the commission at its meeting on Tuesday in Strasbourg.

The commission’s immediate challenge, however, will be to ensure the currently deadlocked 2021-2027 budget negotiatons reflect the same level of ambition to provide the necessary funds. Differences between net contributors and recipients remain very wide, making Tuesday’s commission statement aspirational.

To obtain support from the fund, member states will need to prepare plans detailing the transition process and specific actions to reach a climate-neutral economy.

The €1 trillion funding will be made up of four components:

– Some €500 billion from a range of EU programmes for the Sustainable Europe Investment Plan. Under the proposed multiannual budget, some 40 per cent of EU all funding programmes, whether from regional programmes, research, transport, energy, or agriculture, are already earmarked to focus on green projects;

– €100 billion for the “Just Transition Mechanism” (JTM) for coal-dependent regions;

– €100 billion expected from “national co-financing” by member state budgets, yet to be committed;

– €100 billion will come as part of an Invest EU investment package, part-financed by the European Investment Bank, which it is hoped will leverage further private sector investment, to bring the total spend to more than €1 trillion.

Poland had been alone in refusing to commit to the zero-carbon emissions target for 2050 and it is hoped it can be persuaded by the level of the JTM commitment. Importantly for Warsaw, the commission proposals involve some €7.5 billion in “new” money which will help allay fears that green priorities would erode Polish expectations of non-green regional funding.

To the disappointment of the French and some eastern European states such as the Czech Republic and Hungary, the JTM will not be applicable to commissioning or decommissioning nuclear power plants. But the commission has made clear it will consider loosening the EU’s tough prohibitions on state aid in the less-developed regions to allow states to assist industries in transition.

The establishment of the JTM was warmly welcomed by Ireland South MEP Seán Kelly, who says it could represent a massive boost for the midlands. He particularly highlighted the specific reference to regions impacted by the transition away from peat extraction being eligible for support under the programme.

“Under the programme, every member state will be able to get support in order to help their most impacted regions cope with the demands of a transition to a low-carbon economy,” he said. “This is excellent news for workers across the EU whose livelihoods happen to depend on carbon-intensive work. In Ireland, this means workers in places like the midlands, and those at Moneypoint, for example.”

The EU net-zero emissions strategy is far more ambitious than measures other major emitters are considering to tackle global warming. The transition to climate neutrality would start this year and involve stricter emissions limits for industries from cars to chemicals, revamped energy taxes, greener farming, new state-aid rules for companies and possibly an environmental import tax. Everything from finance to the design of cities would need to become more sustainable.