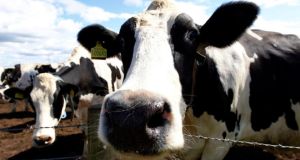 The Minister for the Environment said the Government was examining ways to make the agriculture sector carbon neutral. Photograph: Reuters

Minister for the Environment Phil Hogan has said the Government’s new climate change legislation is “unequivocal” in committing Ireland to all present and future binding international targets on emissions reduction.

Mr Hogan has today published the General Scheme (Heads) of the Climate Action and Low Carbon Development Bill. The full Bill is expected to be published before the summer with it expected to become law by the end of the year.

At a press briefing this afternoon, Mr Hogan addressed criticism on the absence of specific 2030 and 2050 targets in the draft Bill by saying the Government has fully signed up to all binding EU targets and there was no need to reiterate them in the Bill.

“My critics have to acknowledge that this is the first whole of Government climate policy or climate action Bill. All my critics failed to achieve that with the previous government. I reject completely any criticism that we failed to meet targets. We have signed up to binding EU targets and we have no need to reiterate them,” he said.

The Bill provides for a transition to a low carbon economy by 2050 with a significant lowering of emissions as well as a situation in the agriculture sector where there is carbon neutrality (emissions neutralised by advances in technology, more efficient agricultural techniques, and by carbon sinks such as forests and bogs.

The Minister will be required to set out a national roadmap every five years, with sectoral roadmaps required by the four key departments (including Agriculture, and Transport) in this area.

Mr Hogan also announced that the chair of the 11-member expert advisory body on climate change will be Professor Peter Clinch of UCD, who was an economic and environmental advisers to taoiseach Brian Cowen during the previous government’s term. The strengthening of the expert advisory group as well as the shorter time frame for the roadmap came as a result of recommendations made by the Oireachtas Environment Committee, with Labour’s Kevin Humphrey’s and Gerald Nash, in particular, pushing for these changes to be implemented.

The Government, however, has signalled that an exception has to be made for agriculture as there are unique circumstances that apply to it. Mr Hogan and Minister for Agriculture Simon Coveney have argued there is little point in reducing the size of this sector because it will simply mean that Irish produce (which they argue is produced efficiently) will be replaced by inefficiently produced produce from countries such as Brazil and Argentina.

The Government has been looking at land use as well as animal use and has argued strongly that carbon sinks (such as forestry and bogs) be included in the calculations. Mr Hogan rejected the argument that Ireland was seeking a free pass to avoid its obligations in agriculture. “We are examining how we can have a sustainable approach of carbon neutrality in the agriculture sector.

“We want grow the sector in a sustainable way and mitigate the profile that is there at the moment. We are engaged in a political [discussion] that would allow carbon sinks to be taken into account.

“We can have ireland as the best place to grow [sustainable agriculture]. We can have Ireland or Brazilian or Argentinian product. There is a balance to be struck. Where do we want food to come from? How we will feed the world?”