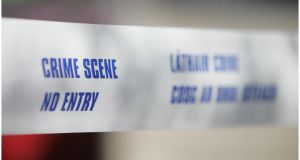 Gardaí are looking for the driver of a car which hit a teenage girl in Co Wicklow over the weekend. Photograph: Bryan O’Brien/The Irish Times

A 17-year-old girl is in a critical condition following a hit and run in Co Wicklow in the early hours of Saturday.

Gardaí in Bray have appealed for witnesses after the teenager was struck by a car at about 3.50am on Saturday on Main Street in Kilcoole.

The girl was taken to Beaumont Hospital in Dublin. Gardaí said on Monday she remained in a critical condition and no arrests have been made. Investigations are following a number of lines of inquiry including the examination of CCTV footage.

It is understood the teenager was walking home from a party in Greystones Sailing Club when the incident occurred.

The vehicle, which failed to remain at the scene, is described as a light coloured - possibly silver - saloon type car. It was travelling northbound through Kilcoole village in the direction of Newtownmountkennedy, towards Greystones/Eden Gate.

“Obviously it’s hugely distressing for the whole family. My heart goes out to them. There’s a great sense of shock in the community.

“Her dad is well-known in the community and they are a lovely family. It’s terribly sad.”