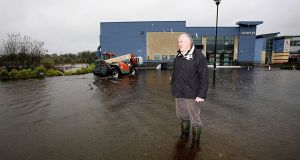 Carrick Cineplex owner Liam Farrell estimates he lost close to €400,000 due to flooding in 2009 and 2015. Photograph: Brian Farrell

For nearly 40 days and 40 nights last year, people were unable to use any of the 166 parking spaces at the back of Joe Dolan’s Bush Hotel in Carrick-on-Shannon, Co Leitrim, as the Shannon’s flood waters rose and rose.

“Not one car could park there. I front onto the high street but all of my revenue comes in the back door – so you don’t need a calculator to work that one out,” Dolan told The Irish Times. He lost all of his Christmas trade.

A year on, Carrick remains unhappy. Proposals to build a flood defence wall to protect the town which has been severely affected by floodwaters twice in the past seven years, are being met with scorn, anger and derision.

The Office of Public Works’s plan to erect a 1.2m barrier along the banks of the Shannon is contained in its Catchment Flood Risk Assessment and Management (CFRAM) study.

Besides the 1.5km wall, the €5.6 million plan includes 536 metres of new embankments for Carrick, while a separate €1m plan for Leitrim village would see a 142m-long flood defence wall and 498m of embankments.

Given that Dolan is chairman of Leitrim Tourism, he might be expected to share most people’s apprehensions, but he doesn’t: “I would live with the aesthetics if I thought it would work, but I don’t.”

Retired Leitrim county council engineer Brian Kenny thinks the proposal from the OPW will do nothing to help 95 per cent of the people affected by flooding.

Seven years ago, locals were assured that the flood waters that caused chaos in the town during the 2009/2010 winter were a once-in-a-century event. However, the optimistic predictions were proved wrong as the same thing happened in 2015 .

Peggy Reynolds (80), from Tumra on the town’s outskirts, remembers December 8th last year, “a cold dark night” when neighbours carried her in her wheelchair to a tractor that delivered her to a waiting ambulance.

“I had to leave my home and go to a nursing home until January 15th,” she recalled. “They put the wheelchair on a big transport box on the back of a tractor, because the ambulance could not get up our road.”

Part of the defences is earmarked for the quay and another section is planned for the retail park in Cortober on the Roscommon side of Carrick, where the cinema has been hard hit in past floods.

“People will still be up all night pumping out water” said Kenny, who warned the CFRAM experts that cracked pipes, manholes and storm-overflows would render expensive defences ineffective “within days”. 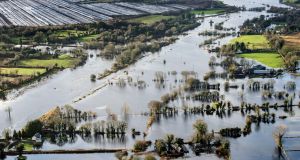 Gallery: Flooding from the air

John Dunne is a sea captain and a former skipper on the Shannon who makes his living delivering new boats to wealthy customers around the globe.

Last year, he was able to get to and from his Carrick home by boat, and by no other means. Today, he and Kenny are part of the Carrick Flood Action Group, who are frustrated that cheaper and better protections are being ignored.

In its report to the Government, the OPW CFRAM claims it would provide protection to 68 of the 78 at-risk properties in Carrick and to 58 of 61 threatened properties in Leitrim village.

However, Dunne says the money would be far better spent dredging pinch points on the river and lowering water levels on Lough Allen to allow it to store water during the winter months.

“Walls may be a solution when there is flash flooding or fast-moving floods, but floods here move slowly and last longer,” said Dunne. “Water will always get in somewhere, unless you have valves and pumps, and there is no budget for either in this plan.”

Things would have been a lot worse last year if Leitrim County Council had not cleared part a non-navigable stretch of water between the villages of Jamestown and Drumsna following the 2009 floods.

“Forestry had started to encroach on the river on each side, but both Leitrim and Roscommon councils have done great work there,” Dunne told The Irish Times.

The Flood Action Group has asked the ESB to lower water levels on Lough Allen in the winter months, given that fewer than 200 boats entered the lake during 2015.

A spokeswoman for the ESB said it was in discussion with the OPW and Waterways Ireland in relation to Lough Allen and had in October reduced the water level by about 0.7m.

“That is nothing,” said Dunne. “ If only five or six boats wander in there during winter, why should the rest of us be disadvantaged?”

Brian Kenny has urged the CFRAM team to also consider removing the sluice gates at Jamestown on a trial basis in the event of another big flood, because last year floodwaters flowed over the top of the gates .

Farmer Michael Heslin, who had 40 acres of farmland under water for weeks last winter, claimed that the neglect of arterial drainage had exacerbated the problem.

“The people of Carrick will go crazy if they build a wall there – only the construction companies will want it,” he said. “There has been no maintenance of the Shannon since the foundation of the State.

“They should have 20 people on two barges going up and down the river to get rid of the bushes and debris,” the farmer declares.

A 24-hour pumping operation continued for weeks outside Cryan’s Hotel last year as friends and neighbours helped owners Seán Murtagh and Frances Cryan to keep the water out.

“We had to move out of the house for three weeks,” recalled Seán, who like John Dunne believes CFRAM is targeting the symptoms rather than the cause of the flooding .

His neighbour Eugene Matthews was raised on a barge so he was unfazed when the waters forced him to resort to a canoe last year. The solutions are simple. “It’s not rocket science,” he said. “They need to dredge.”

Carrick Cineplex owner Liam Farrell estimates he lost close to €400,000 due to flooding in 2009 and 2015 . The cinema had to close for five months when the flood water breached the building in 2009.

“What annoys me most about CFRAM is that it is a total waste of money. I have no faith in it,” said Farrell , chairman of the Flood Action Group. “Carrick has a beautiful 19th century streetscape and this wall would be totally incongruous.”

The toll on people affected by flooding is immeasurable. “Just think of the effect on people of that deluge of water, the financial insecurity it causes, and the physical darkness.”

Brian Kenny thinks the Carrick flood defence wall is also unlikely to happen anytime soon . “They would have to apply for planning permission. It might never happen,” he said.

If it does, however, local county councillor Finola Armstrong McGuire worries that the view from the park benches in the town’s People’s Park will never be the same: “If this wall is there you won’t even be able to see the Shannon,” she said.