Buildings at centre of Moore St protest ‘not historically significant’

Protestors calling themselves 'Save Moore Street' have occupied buildings linked to 1916 on the famous market street in Dublin. Video Éanna Ó Caollaí 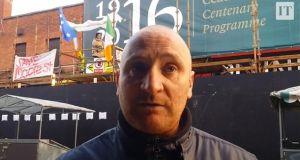 Spokesman for the Save Moore Street group Damien Farrell.

Buildings at the centre of a protest in Dublin were in ruins prior to the 1916 Easter Rising and “are not historically significant,” the Department of Arts, Heritage and the Gaeltacht has said.

On Thursday, protesters occupied buildings where the 1916 rebels had their last headquarters on Dublin’s Moore Street in a bid to have a protection order extended to adjacent buildings they say are also historically important.

Damien Farrell, spokesman for the Save Moore Street group occupying the buildings, said the occupation would continue until clarification was given about the work under way at the site.

He said the group was seeking guarantees that numbers 18 and 19 would not be demolished and also wanted to know what the plans were for number 13.

In a statement issued on Friday afternoon, the department said numbers 13, 18 and 19 are not part of the national monument, and “are not historically significant.”

The statement said demolition of numbers 13 and 18 “is necessary to underpin the national monument, which is an old building built without proper foundations.”

This will allow for the insertion of gables which the department said “are necessary” to safeguard the long-term stability of the national monument.

The statement also said Minister for Heritage Heather Humphreys “is very disappointed that any group would attempt to delay these works and jeopardise the project.”

“There were no insurance claims made in relation to either building subsequent to the Rising. Evidence from the Ordnance Survey suggests that No 19 was still in ruins as late as 1939,” the statement said.

“No 13 has received a new façade in modern brick. The interior is modern and nothing survives of the historic fabric,” it added.

Several hundred protesters attended the site on Friday afternoon to show support for the ongoing occupation.

Another demonstration is planned for Saturday afternoon.

Speaking after visiting the site this morning, Proinsias O’Rathaille, grandson of Michael Joseph O’Rahilly (The O’Rahilly) who died on a street adjacent Moore Street after leading a sortie from the GPO, said he was “horrified” at the impact the work has had on the buildings.

Mr O’Rathaille said fittings had been removed from number 16.

“The old staircase which was to be preserved and doorways have all been removed and all the old timbers have been thrown out the back,” he said.

Mr O’Rathaille said he sent a text message to Taoiseach Enda Kenny after the work started stating that: “Intent to demolish on Moore Street! What a way to commemorate the brave men of 1916 and to start the Centenary???”

The Moore Street buildings were bought by the State for €4 million in 2015 following a proposal by Minister for Arts, Heritage and the Gaeltacht Heather Humphreys to purchase the site at 14 to 17 Moore Street from Nama.

The Moore St buildings, which date back to 1763, were designated national monuments in 2007 but subsequently became the subject of controversy after development company Chartered Land, was granted permission for an 800,000sq ft development on the nearby 2.7-hectare site of the old Carlton Cinema on O’Connell Street in 2010.

As many as three hundred Irish Volunteers and members of Cumann na mBan escaped to the buildings from the GPO after it caught fire following a bombardment by British artillery during Easter Week 1916.

Volunteers broke into houses on Moore Street and tunnelled their way through the terrace and took up new positions in each house, making Number 16 their headquarters.