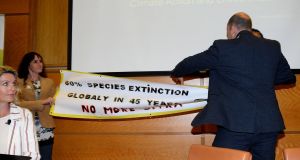 Members of Extinction Rebellion Ireland stage a protest during a speech by Environment Minister Richard Bruton at the National Botanic Gardens of Ireland in Dublin. Photograph: Justin Farrelly/PA Wire

Minister for Climate Action Richard Bruton was constantly interrupted by protestors as he attempted to address a conference on forestry as a solution to Ireland’s climate emergency at the National Botanic Gardens in Dublin on Monday.

ERI acknowledged the urgent need for more woodland when average forest cover in Europe was 32 per cent and just 10.5 per cent in Ireland. But “the type of trees favoured by the forestry industry and Coillte – conifer plantations consisting of sitka spruce – is not the answer,” one protestor said.

The emerging climate catastrophe should not be used as an excuse to plant any more non-native commercial monoculture plantations, ERI said.

“Not only are such plantations, harvested after a couple of decades and often unlocking carbon already stored away in bogs, [THEY ARE]far less effective in reducing levels of CO2 than natural native woodlands,” it added.

“Current practices of planting and managing Sitka plantations are detrimental to Ireland’s wildlife, in particular to many species of birds and insects already threatened by extinction.”

The protestors called for the restoration of existing native forests and a commitment from the Government to set aside large areas of land for rewilding and mature native woodland.

Mr Bruton said it was not the first time he had been a meeting where strong views were expressed. He accepted there were issues around forestry including insufficient levels of afforestation in Ireland to capture carbon. Resistance of farmers and the perception in certain regions that they were taking all the forestry needed to be addressed.

On pursuing climate actions, “the biggest challenge is to persuade people that this a journey we need to take together”, Mr Bruton added.

People needed to understand the future of their home, farm or enterprise “is on the line here”, if they were not climate-resilient.

FII chairman and chief executive of Balcas wood products Brian Murphy said citizens referred to “sitka wars” and “sitka deserts” and non-native species, but the species was “tall, straight and grown in Ireland long before the friesian cow”.

Later, three members of Extinction Rebellion Ireland locked themselves to the Department of Communications, Climate Action and Environment in protest against what they called the Government’s “undemocratic blocking” of the Climate Emergency Measures Bill.