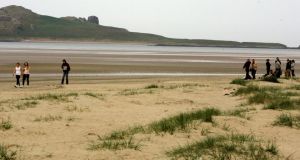 Fingal County Council is warning swimmers not to use the water at Burrow Beach in north Dublin until further notice. File photograph: David Sleator/The Irish Times

While a bathing warning was issued today for Burrow Beach in Sutton, Dublin all complete swimming bans were yesterday lifted at Dublin beaches .

The bans had been introduced earlier this week after poor water test results followed a weekend of heavy rain.

Fingal County Council today said none of the north Dublin county’s beaches were completely closed. It is “advising against” rather than prohibiting bathing at three beaches: Claremont Beach in Howth, Loughshinny Beach and Burrow Beach.

The precautionary bathing notices for Claremont and Loughshinny beaches replaced a bathing ban status earlier in the week.

The council advised swimmers not to use the water at Burrow Beach due to poor microbiological results and swimming in it could could cause illness . The likely cause of the problem at the beach is a “missed connection in storm water drains”, the council said. It has taken a further water sample and is investigating the cause.

Dublin City Council also lifted the swimming prohibition at Dollymount Strand in the north of the county due after it received new water test results.The ban was put in place earlier this week due to elevated levels of bacteria.

A bathing ban was also removed today in the south of the county at Killiney and Sandycove beaches by Dun Laoghaire Rathdown council after results showed water to be “normal”. However the appearance of the lion’s mane jellyfish in the waters means the red flag was raised at Sandycove, Killiney and Seapoint swimming areas .

Many of the bans were introduced earlier this week after elevated levels of bacteria in samples taken on Monday, following a weekend of extremely heavy rain.

In its August newsletter released yesterday the Environmental Protection Agency (EPA) said recent extremely heavy rain had resulted in restrictions at a number of bathing waters, mainly in Dublin. “ Such actions are essential to ensure that the risk to the public of contracting gastro-intestinal illness as a result of bathing is minimised,” it said.