Another Life: ‘I’ll kneel down and bite you with my teeth’

The prickly problem of thistle removal can result in a sore wrist . . . and much muttering 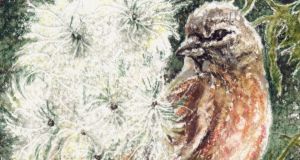 The tall marsh thistles of the hill pasture, so stately and elegant only a few weeks ago, have been reduced by gales and rain to spiny, bedraggled spikes. I doubt if their seeds flew very far. It needs a dry day or two for thistle heads to billow up with thistledown. The seeds of Cirsium palustre, in any case, have a tenuous grip on their parachutes which may fly on without a passenger.

As thistle species go, this is one of the least troublesome to Irish agriculture. But it was certainly included in the Noxious Weeds Act 1936, which scheduled thistles, along with ragwort and docks, to be banished from the land on pain of summary conviction and a fine.

The act – still nominally in force – was framed in the era before selective herbicides and strimmers, at a time of worldwide farming depression and much neglected or abandoned land. European thistles, once introduced, had spread across temperate grassland from the prairies of Canada to the sheep ranges of Australia and New Zealand, prompting their governments to quite draconian legislation.

In Ireland, the new law was backed by a small army of itinerant inspectors, their doubtful impact well described in 1938 in Green Fields, the captivating chronicle by Stephen Rynne, then farming at Prosperous in Co Kildare.

“Repeated and annoying visits from the personage known locally as the ‘Thistle Man’,” he wrote, “cannot intimidate me into making more than a single cutting. And even this is a cutting strictly for show purposes: it consist of going over those parts of my farm which lie exposed to the road and there making a slipshod hacking of all the larger thistles.”

Long sessions with the thistle-hook, he complained, resulted in a most painful wrist. “No matter how skilful one becomes, one often misses a thistle, returns to miss again; and missing three or four times, one begins to mutter: ‘Well, if I don’t get you this time, I’ll kneel down and bite you with my teeth.”

Today’s herbicides, you might think, counter the need for such frustration, but one big chemical company, Dow AgroSciences, suggests that “over 200,000 hectares of grassland in Ireland is infested with thistles”. The main species in question are Cirsium arvense, with creeping roots, and Cirsium vulgare, the spear or “Scotch” thistle, more bushily robust and spiky.

The first, an invasive, persistent perennial, remains an international problem (it becomes the “Canada thistle” across the Atlantic) and dominates research priorities. A major overview in 2010 digested some 400 scientific papers, many studying non-herbicidal methods, using patterns of cattle grazing, herbivorous insects, natural parasites or fungal rusts. (It’s online at iti.ms/2dqm7yo.)

The creeping thistle, like ragwort, supports its own generous complement of native insects, providing food for more than 20 species of butterfly and moth, and winter nourishment for goldfinch and linnet. Such ecological value is spelled out in guidelines for contractors to the National Roads Authority. The plants, as it says, are natural colonisers of disturbed soil and the objective “should be control and not complete eradication” (Online at iti.ms/2dFjPZZ.)

One of the prettiest, least prickly of thistles is Cirsium dissectum, the bog thistle, much more common in the west. It is frequent in the Burren, surviving even a lengthy drowning in winter flooding of the turloughs. As the community’s cattle are driven upwards at the end of the month in the Burren’s custom (and now festival) of transhumance, they will include the thistles among their grazing on the dry, warm limestone of their winterage.

I have read several books about the Burren, Ireland’s ecological showpiece, but none offered such rounded, instructive enjoyment as The Breathing Burren (Collins Press, €24.99) by Gordon D’Arcy. This celebrates more than 30 years of exploring a landscape and its natural world in a book abundantly enriched with D’Arcy’s crisp and evocative watercolours.

Living at the Burren’s edge, he has walked its length and breadth in every season, much of it a taxing obstacle course of rock, ravine and scrub. His essays have the immediacy of many deeply felt encounters and discoveries, chronicled over the years in his diaries and notes for paintings.

Far from lone naturalist, he has shared his fascination and a mounting store of knowledge in schoolrooms and lecture halls and as leader of the Burren’s many visiting groups of “nature people”. He has also lived through important years of reckoning for the region in tensions between nature conservation, tourist development and farming.

Experience of the EU-aided model for the Burren, with its focus on sustainable family farms in balance with natural habitats, has so far been encouraging. But D’Arcy’s final thoughts on a future for conservation complicated by climate change and economic views of nature are well worth their pages.

1 Coronavirus claims one more life while 11 new cases reported in Republic
2 Covid-19: Travel restrictions to stay and 'green list' put on hold amid fears of second wave
3 Bobby Storey: The IRA's planner and enforcer who stayed in the shadows
4 Gardaí seek help in finding missing Roscommon toddler
5 Rare whale dies after getting into distress in Wicklow Harbour
Real news has value SUBSCRIBE