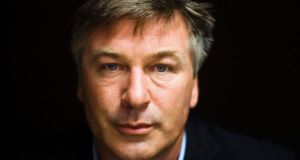 Actor Alec Baldwin directed a series of tweets at filmmaker Phelim McAleer, who has made a film in support of fracking entitled FrackNation. Photograph: Mark Blinch/Reuters

Baldwin, who is an environmentalist and anti-fracking advocate, objected to McAleer’s presence on a panel at the Hamptons International Film Festival (HIFF) next month to discuss the film Gaslands 2.

Baldwin is on the executive board of the festival and was due to chair the discussion afterwards on the advantages and disadvantages of fracking.

That film is a follow-up to a previous one entitled Gaslands, which has been shown in communities in Ireland where the controversial gas extraction process might go ahead in the future.

He directed a series of abusive tweets at McAleer who has made a film in support of fracking entitled FrackNation. The Independent Oil and Gas Association New York (IOGA) had put the former Sunday Times journalist forward to speak on their behalf.

Through his Twitter handle @ABFalecbadwin, Baldwin called Mr McAleer a “shill for gas companies”, “a lumpy old gas whore” and a “dreadful filmmaker”, and said his documentary a “laughably stilted industry valentine”.

“Come debate me, you tired old bullshitter,” he concluded.

In response, McAleer said he couldn’t understand why Baldwin had refused to allow him on a panel to discuss fracking, yet wanted to debate him himself.

“Put me back on that panel and I’ll answer all those questions,” he said.

Since accepting the challenge, McAleer said Baldwin has blocked him from his Twitter feed. “He clearly doesn’t want a debate with me,” McAleer added.

Since moving to the US, McAleer has made a number of films challenging environmentalists, including Not Evil Just Wrong - made in response to Al Gore’s An Inconvenient Truth.

He also confronted the maker of Gaslands, Josh Fox, about alleged inaccuracies in the film.

He said FrackNation was made through FundIt and he accepted no money from oil or gas companies.