Schools can be ‘assured’ of safe return after mid-term, Foley says 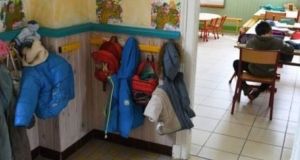 The Government plans to keep schools open under Level 5 of the Living with Covid plan. File photograph: The Irish Times

Minister for Education Norma Foley has said schools can be “assured” that all necessary measures will be put in place to ensure a successful return to school after the Halloween break.

Ms Foley’s comments come after teachers’ unions expressed concern that children would not be able return to school safely after the mid-term break due to rising cases of Covid-19 in the community and perceived weaknesses in testing and contract tracing for schools.

Acknowledging that there “will always be concerns” the Minister said that “when schools closed in March there was concern whether we could ever successfully reopen schools. But because of the efforts of all there has been a very safe and successful return”.

The Minister said public health resources for testing and tracing in schools would be “broadened and strengthened.”

School teams were being put in place in each HSE area supporting the work of public health teams, she explained.

Ms Foley said everybody in the school sector was working to keep schools open and continue children’s education safely through the pandemic.

“Everything that’s being done, every step of the way, is underpinned by public health,” she told RTÉ radio’s News at One.

Earlier on Tuesday, the Irish National Teachers’ Organisation said it “cannot be convinced” children will safely return to school after the mid-term break.

“Back in March the Government made the right decision to close schools, we worked so hard to reopen schools, but three months on I cannot be convinced by Micheál Martin’s comments last night that the children will be returning after Halloween to a safe school and of course it’s vital that their education continues, but it’s even more vital for their families that they will remain safe,” general secretary John Boyle said.

“Will parents put their children on the bus? Will teachers who are pregnant or teachers who have underlying health conditions, will their doctors allow them back into schools when the virus is so high in the community that Dr [Colm] Henry stated a couple of days ago that it is a great threat to schools.”

He said “the shambolic approach of public health to the tracking, to the testing and the surveillance of our sector is going to be sorted out before the first Monday in November”.

Kieran Christie of the Association of Secondary Teachers Ireland, said there was a lot of anecdotal evidence of long delays in contact tracing after cases were identified in schools.

The union will be balloting its members as the union needs to be in a position to “react with agility” if they need to take action. “We want schools to open, but we want them to open safely,” he said.

However, speaking on the same programme, Minister for Housing Darragh O’Brien said “schools will be back” after the break.

“It’s really important that people understand that schools will remain open. Where concerns are raised by teachers, of course they will be addressed,” he said.

On Monday, the Government announced the country was moving to Level 5 of the Living with Covid plan, under which schools will remain open, from Wednesday.

Speaking at the announcement on Monday night, Taoiseach Micheál Martin said it was “necessary” to keep schools open to avoid young people’s futures becoming “another victim” of Covid-19.