Last year 10.8 million overseas trips were made by non-residents to the State 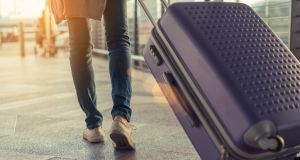 The most popular destination to and from the State’s main airports was London-Heathrow with over 2.5 million (2,505,600) passengers travelling on this route last year. Photograph: iStock

Last year may prove to be a high watermark for employment, international travel, economic growth, consumer spending, marriages and many other aspects of modern life as they are measured by the Central Statistics Office (CSO)

The impact of Covid-19 has hit all such activity hard and the CSO’s statistical yearbook for 2019 paints a picture of a very different country to the one people will recognise now as a year like no other draws to a close.

Despite the increase in employment, the study shows that just over 15 per cent of people in the State were still considered to be experiencing “enforced deprivation”, defined as not being able to afford two or more basics, such as heating the home adequately or eating a meal with meat, chicken or fish every second day.

The divide between those who own their own home versus those who rent was laid bare with the median net wealth for owner-occupied households said to be €287,800 compared with just €6,500 for rented households.

The fresh figures from the CSO also show that last year 91 per cent of all households had access to the internet at home .

In 2019, 10.8 million overseas trips were made by non-residents to the State, an increase of 1.8 per cent on the 2018 figure while the most popular destination to and from the State’s main airports was London-Heathrow with over 2.5 million (2,505,600) passengers travelling on this route last year.

The study took a closer look at the impact Covid-19 has had and how the profile of the disease has been changing.

It shows that the people affected by the virus has shifted since March with the percentage of cases amongst younger age groups climbing sharply with confirmed case rates in people aged under 24 at 34 per cent in September compared with less than 10 per cent in March and April.

It shows that health care workers are now less likely to contract the illness than they were at the start of the crisis, making up 7 per cent of all confirmed cases in September from a peak of 36 per cent in April.

Looking at travel, the study showed that for the period January-July this year 3,414,000 people arrived in Ireland from overseas - a decrease of 70.5 per cent compared to the same period in 2019. Given that the period takes in two months in which Covid-19 was not factor, the decline since March is likley to have been considerably more dramatic,

The study also indicated that since April, the volume of cyclists in Dublin outside peak hours increased by almost 10 per cent on the previous year.