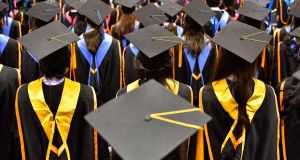 Irish universities are seeking more freedom and flexiblity to hire and pay staff in order to compete with Europe’s top-performing colleges. Photograph: iStock

Irish universities are seeking more freedom and flexibility to hire staff in order to compete with Europe’s top-performing colleges.

The aims are contained in a new charter which the State’s seven universities say will underpin the future of third-level education.

Wages for academic staff are also strictly aligned with public sector payscales, with top salaries capped at €190,000, except for a handful of international researchers who are allowed to earn more.

The State’s seven universities say changes are needed to free universities from the “grinding levers of State to allow them innovate and grow”.

The intervention comes following a decade where public investment in the sector has tumbled, while top higher education institutions have slipped down global rankings.

Prof Patrick O’Shea, president of UCC and chair of the Irish Universities Association, said a demographic bulge and a much more competitive international education environment was forcing the sector to “confront stark realities”.

“It is incumbent on the State, on universities and on society to implement initiatives to develop and fully realise our national talent. The time for talking is over. The time for change has come,” he said.

He said the charter identified a range of challenges and solutions facing universities and put “meat on the bones” of the Government’s ambition.

The charter, launched at an event in Dublin on Monday, identifies six key objectives needed to delivering “a fit for purpose” university system.

They include more flexible structures along with stronger governance and accountability for the sector.

Many of these aims will also require either government funding or legislative reform.

The universities’ target is to enable the Irish education system to become the best in Europe by 2026, which matches the Government’s ambition for the national education sector.

Jim Miley, director general of the Irish Universities Association said: “This is a mission-critical initiative for the combined universities. The political community now needs to step up to the challenge and match the ambition and commitment demonstrated by the universities.”

Two years ago an expert group report on future funding for higher education set out options such as a student loan scheme or a fully publicly funded system to help build a “world class” third level system.

Minister for Education Richard Bruton referred the report to the Oireachtas education committee after stating that a future funding model will require political consensus. However, it has languished in the committee since.

Mr Miley said every politician was aware of the major funding deficit for third level, yet no progress has been made on re-vamping the overall structure.

“Too many are hiding behind the fig leaf of the option they don’t like. Meanwhile, the scale of funding deficit continues to grow as more and more students enter our universities,” he said.

“We share the Government’s ambition for education but that ambition needs to be matched with a commitment to provide the structures and funding required to deliver it. It’s time to get real on this,” he said.

The charter states that universities need to be able to respond more nimbly to the changing needs in higher education.

“The rigid, centralised control on staffing in universities should be loosened to allow greater flexibility for individual universities to develop human resource plans appropriate to their needs and growth levels,” it states.

“The Employment Control Framework, introduced as a recession control measure, is no longer fit for purpose for the Irish university system.”

It adds that the best universities in Europe, and globally, are empowered to make their own decisions and implement them.

By contrast, it says, the autonomy of universities has been eroded in recent years in Ireland.

It also says university governing authorities should be responsible for resource allocation and overnight.

It notes that universities should also be committed to the standards of governance, in accordance with international practice.