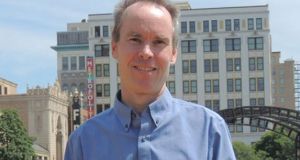 Prof Kevin Scannell will work with researchers from NUI Galway to research and develop computer resources for the Irish language.

An American academic who has been awarded a scholarship to spend six months in Connemara has said he plans to help develop an Irish-language Siri or Alexa style virtual assistant during his stay.

Prof Kevin Scannell from Saint Louis University in Missouri has been awarded the Fulbright Scholarship by the United States government and will spend the first half of 2020 in the Connemara Gaeltacht area of Carna. He will work with researchers from NUI Galway’s Acadamh na hOllscolaíochta Gaeilge to research and develop computer resources for the Irish language.

Prof Scannell plans to develop keyboard input methods, spelling and grammar checkers, online dictionaries and translation and conversational tools, similar to Siri and Alexa, to make it easier for Irish speakers to use the language “without having to shift to English”.

Prof Scannell, who has worked with people around the world to help build the online presence of their native language, has already developed an Irish spell checker, grammar checker and thesaurus, as well as dictionaries and translation engines that support Irish, Scottish and Manx Gaelic. He also works with Gmail, Twitter and WhatsApp to provide Irish localisations for software products.

The academic said he plans to make use of “transfer learning” which allows resources for one language to be transferred directly to another (less well-resourced) language. He will focus on building Irish along with other Celtic languages which share similar linguistic structures.

The Fulbright scholarship was set up in 1946 offering students, scholars and professionals the chance to study and research in 155 countries around the world.

The Fulbright programme includes a grant for Irish language teachers to spend 10 months teaching Irish and taking classes at an American university.

The programme also offers summer Gaeltacht grants to US citizens who are learning the Irish language to spend two to six weeks in a Gaeltacht region.