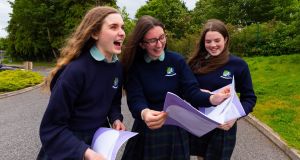 Leaving Cert higher level French students had a challenging exam with little room for rote-learning, according to teachers.

There was also disagreement among French teachers over how to tackle a comprehension question on the paper that contained some tricky vocabulary, according to Natasha Lynch of EssentialFrench.ie.

Ms Lynch was discussing the paper with her colleagues, all of whom are native speakers.

Elizabeth Hayes Lyne, director of FrenchNotes.ie, said that a lot of students would be disappointed that the yellow vest demonstrations had not featured on the paper.

“A lot of students would have prepared vocabulary and sentences on the theme of the environment, but the question was quite specific, asking students what everyday habits they should change in order to save the world.”

Ms Lynch said the higher level paper did not leave any room for rote learning, but that teachers were “ crying out” for more training in how to prepare their students with the breadth and depth of grammar and vocabulary necessary for the changing exam.

Students were also unhappy with the listening comprehension, Ms Lynch said. On her Instagram account , students said the accents on the recording were difficult to understand, they spoke too fast, and some of the vocabulary was tricky.

Ms Lynch said, however, the diary entry question, asking them to write a note about a concert, was “beautiful.” But, overall, the paper was unpredictable. “Sport comes up most years and it did again this year, but it asked about how sport contributes to peace and tolerance, which is very difficult,” she said.

“Students will also have been surprised to see a question on voting after it appeared last year, and I don’t think they would have been prepared for it.”

Ms Hayes Lyne added that the diary entry and email allowed students to draw on their oral notes.

“My own students would have had absolutely no difficulty with either of these questions,” she said.

The second choice for the obligatory or compulsory section asked students their thoughts on how an act of kindness, even a small one, is never lost.

“This presented an ideal opportunity for students to write about a time when they did something kind for someone or were on the receiving end of an act of kindness,” said Ms Hayes Lynn.

Corinne Gavenda, French teacher at The Institute of Education, said the exam stayed very close to student’s interests with questions on the environment and third level education.

She added that it was “a little bit challenging in places, as a higher level paper should be.”

The much-awaited theme of the environment came up in the reading comprehension with a focus on food wastage.

“This could not be more topical. The text was still challenging and students would need to have taken their time to go through the text and read the questions carefully,” Ms Gavenda said.

She said the second comprehension - featuring an unusual extract about a girl travelling alone in Europe - was approachable but a “ little more challenging than last year”.

“The grammar question involved finding a reflexive verb, something students sometimes struggle with,” she said.

Question one, part A - a compulsory question - focused on the environment and asked students about what everyday habits they should change in order to save the world.

Part B featured a reaction rather than a story on the theme “an act of kindness is never lost”.

“ This was not something students would have prepared for and yet it was not a difficult question, and was something that everyone should be able to write about,” Ms Gavenda said.

The diary question, was “very broad” and asked students to write about going to a concert with a friend.

The email question required students had to compose a message in which they congratulated a friend for getting a place in college.

“ This was very topical and is a part of students everyday lives,” said Ms Gavenda.

The four opinion pieces in questions three and four were “factual and modern” and most of them would have posed no problems to well-prepared students, she said.

There were also some “very nice” questions on drugs and young people and the advantage of learning foreign languages.

On the ordinary level paper, Ms Lynch said that it was perhaps a little too easy, with some of the material more suitable for Junior Cycle level.

Ms Hayes Lyne said that the languages and questions in the ordinary level reading section, which covered French novels, how to save the planet and an interview with a cartoonist, were very accessible. In the written section, she added, there were no surprises.

“Students could have drawn from their oral notes in answering a question about a house swap,” she said. “The postcard, message and diary were in line with previous years, and the formal letter to a tourist office seeking information would have been done in class.”