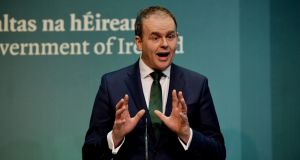 Minister for Education Joe McHugh is due to meet with hundreds of Irish teachers at meetings in Dubai and Abu Dhabi on Wednesday and Thursday this week. Photograph: Alan Betson

An overwhelming majority of Irish teachers based in the United Arab Emirates say the quality of life is better and would recommend a career there, according to a survey conducted by the Department of Foreign Affairs.

The online poll of more than 1,000 teachers based in the Gulf also indicates that salaries, pay inequality for new entrants, housing costs and a lack of permanent teaching posts are among the main barriers to returning home.

Despite this, about half say they plan to return to Ireland to teach within the next three years or so. Ten per cent said they would not return.

The survey results come as Minister for Education Joe McHugh arrives in the Gulf as part of a two-day “fact-finding” mission, which includes gathering teachers’ views on measures to make it easier to return home.

School management bodies say there is a “crisis” in teacher supply with acute shortages of cover at primary level and a lack of teachers in key subjects at second level.

It is estimated that there are about 2,000 qualified Irish teachers based in the Gulf. Many teachers based there receive tax-free salaries of between €30,000 to €60,000, along with free annual flights home, medical insurance and free or heavily subsidised housing.

The Department of Foreign Affairs poll shows most Irish teachers based in the Gulf are female, aged between 25 and 34 and do not have children.

Most have lived in the region for less than three years and had teaching experience in Ireland or the UK prior to leaving. Just over a fifth of teachers were on career breaks from Irish schools.

A large majority (76 per cent) said they moved to the Gulf for financial opportunities, followed by lifestyle change (40 per cent), unemployment/underemployment in Ireland (35 per cent) and career development (30 per cent).

The vast majority ( 86 per cent ) said the quality of life is better in the Gulf than in Ireland, while a similar proportion (93 per cent) would recommend a career as a teacher in the Gulf to others.

Mr McHugh is due to meet with hundreds of Irish teachers at meetings in Dubai and Abu Dhabi on Wednesday and Thursday this week.

He insisted he was not in the UAE to “recruit teachers or convince anyone to come home”.

“It is about trying to see what practical measures can be taken for teachers who have made a decision to return home and whether that journey can be made easier for them,” he said.

However, general secretary of the Irish National Teachers’ Organisation (INTO) John Boyle said there were a number of practical steps Mr McHugh could take over the coming months.

These included boosting promotional posts at primary level and ending two-tier pay for good in an upcoming pay review.

“If you are a teacher in a leadership position in a school abroad, your only opportunity to do that at home is to apply to be principal or deputy principal . . . We need more assistant principal posts. We’re down by about 4,500 posts of responsibility in the primary sector,” he said.

Mr Boyle also called on the Minister to provide a clear pledge that pay inequality will end in an upcoming public sector pay talks.

He said that while pay equality had been restored for those who those hired after 2015, there was still a large cohort of teachers hired prior to this on lower pay scales.

The INTO general secretary also said moves to reduce class sizes were important and would help make the profession more attractive.

“If the Minister can make commitments on these issues, he might well have a planeload of teachers ready to come home,” he said.