Up to 4,000 LGBT+ teachers ‘hiding their sexuality’ over discrimination fears 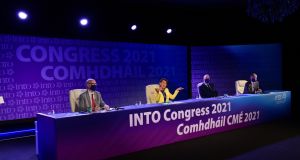 Thousands of LGBT teachers are “hiding their sexuality” due to fears of discrimination within schools, say primary teachers.

Despite laws which provide for equal employment opportunities for all primary school teachers, the Irish National Teachers’ Organisation’s (INTO) annual congress heard that some schools patron bodies believe their sexuality is “intrinsically disordered”.

Joe McKeown, INTO vice-president, said: “Only 18 per cent of LGBT+ in the Republic and 12 per cent in the North have declared their orientation in the school community. This means that there are approximately 4,000 teachers on this island who do not feel comfortable revealing their true identities in schools.”

He added: “Much has been achieved in recent years, but a lot more remains to be done… When the patron of a school feels that the actions of LGBT+ teachers are intrinsically disordered, it is difficult for LGBT+ teachers to feel protected or valued.”

A motion passed at the congress aims to protect members from discrimination, “particularly with regard to recruitment and promotion, of all teachers regardless of gender identity or sexual orientation.”

It also “condemns any homophobic, biphobic and transphobic attitudes that may be expressed, including implicitly, in schools.”

Teaching principals at primary level also warned they are being pushed to breaking point due to ever-expanding workloads with “no right to disconnect’.

The Irish National Teachers’ Organisation’s (INTO) annual congress heard that many principal teachers are working late into the night and at weekends to keep pace with rising workloads and expectations placed on them.

They highlighted a trend where the Department of Education tends to issue circulars late on a Friday evening, giving principals “little or no downtime” and an expectation to be “on call at all times” in order to implement last-minute guidance.

Principals said they do not get any additional leave, over-time or time in lieu despite the extent of additional work,

School principal Vincent Duffy said the official duties and responsibilities were last outlined in a circular in 1973 which did not reflect the more complex and expanded role of principals.

Quite apart from education initiatives and strategies, he said much of the work of modern principals involves dealing with Tusla, psychological services and the HSE on complex child welfare issues.

Delegates voted in favour of the union appointing an independent auditor to carry out a comprehensive review of the role of principal.

Members also restated their long-standing call that principals’ payment should reflect the number of staff and workload.

They are seeking five extra personal vacation days to compensate them for the extra time spent working during holiday periods.

Speakers on the motion also emphasised the need for administrative supports including release time of at least one day per week for teaching principals, support for building projects, the full restoration of posts of responsibility and the appointment of administrative deputy principals on the same basis as secondary post-primary schools.

INTO general secretary John Boyle said: “Government can’t simply ignore this issue. It’s not going away, it’s getting worse and we can’t afford to wait until school leaders burn out to address it. It is 48 years since the Department of Education issued a circular on the role of the primary principal, so it’s long past time for a root and branch review.”

Separately, delegates called for greater investment in disadvantaged or Deis schools to ensure sufficient supports are in place to help children reach their full potential.

INTO members said lower class sizes in the most disadvantaged schools would help improve the life chances for pupils.

They backed a motion calling on the union to convene a series of regional meetings of Deis schools to develop a comprehensive campaign, up to and including industrial action.

It calls for a maximum class size of 18:1 for senior classes and 15:1 for junior classes in the most disadvantaged schools, along with the restoration of posts of responsibility and the provision of a hot meals programme.

“We have shown we are fully prepared to utilise any and all options at our disposal to protect our most disadvantaged pupils,” she said.

The INTO also elected Mr McKeown, a principal teacher in St Patrick’s De La Salle BNS, Kilkenny, as the union’s next president.

A native of Haulbowline, Co Cork, he has been on the union’s central executive committee since 2012.