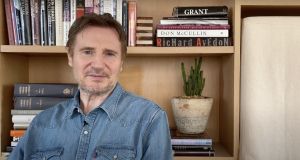 Liam Neeson, the Ballymena-born star of Michael Collins and Schindler’s List, sent the message to those wishing to emulate Seaview Primary School in Glenarm, Co Antrim.

The actor Liam Neeson has sent a congratulatory video message to parents and teaching staff in Northern Ireland following the first Catholic school to have been approved for integrated status.

The Ballymena-born star of Michael Collins and Schindler’s List sent the message to those wishing to emulate Seaview Primary School in Glenarm, Co Antrim.

The actor is a long time advocate of integrated education in Northern Ireland and has worked with the Integrated Education Fund (IEF) as an ambassador to champion the process.

“I am delighted that so many parents across Northern Ireland are choosing an integrated future for their children,” he said in the video message.

“I’m delighted to say that Seaview is just one of a number of schools that has conducted a democratic ballot of its parents since the Integrate My School Campaign was launched just a few years ago.”

He described the process as a “courageous” effort by parents and staff to ensure children from different traditions can come together in the same schools.

“You are actively helping to build inclusive communities,” he said.

The IEF’s Integrate My School Campaign said there has been a “surge in interest” in the approach where parents vote on the future. A number of other schools have already undergone the process.