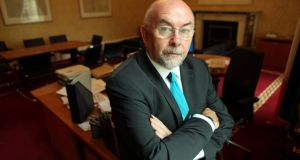 Minister for Education Ruairi Quinn said it would be a matter for Sola to decide if a course was not delivering. Photograph: Frank Miller / The Irish Times

Further education courses which are underperforming, by failing to attract students or match them with job opportunities, will have their funding cut under an eagerly awaited five-year strategy for the sector.

The Further Education and Training Strategy 2014-2019 is the first policy document of its kind and aims to repair some the reputational damage done to the training sector by the Fás scandal, while also challenging some of the negative comparisons between vocational colleges and higher education institutions.

Pat Delaney, chairman of Solas, which was established last year to replace Fás, the disgraced training agency, said the aim of the strategy was to turn further education into a “fourth pillar of the Irish education system”, alongside the primary, secondary and higher levels.

He described as key objectives “consistency, quality assurance and formal accreditation”, saying poorly performing programmes would no longer be financed. “It will inevitably disturb the status quo” but he said the plan had to be “radical” to best serve the needs of both learners and employers.

The plan sets out a number of policy goals for the sector, including addressing skills shortages in the economy, supporting the inclusion of people of all abilities in society, and creating learning paths for life-long career and personal development.

It draws on several pieces of research, including an ESRI report and a review of the apprenticeship system which concluded there was “significant scope to expand employer-led apprenticeships” in occupations such as retail, hospitality, business administration and sport and leisure.

It also follows a major overhaul of the structure of the sector which includes the streamlining of 33 existing VECs into 16 Education and Training Boards (ETBs).

This year, an estimated 200,000 people will enrol in State funded further education schemes at a cost of €826 million to the exchequer. But the report states: “Continuing to offer more or less the same course profile from one year to the next is not appropriate.”

Recommending a “new outcomes-based funding model”, it said this would include looking at the feasibility of increasing, within existing resources, the number of places for clients referred by the Department of Social Protection, as well as “accessibility to this provision all year round”.

The strategy also suggests the increased use of outsourcing on what Solas called “a strategic basis”, and calls for more investment in staff development amid concerns that some teachers lack the requisite skills and qualifications.

“Interviews with stakeholders point to the specific needs of the sector that seeks to marry pedagogical skills with up-to-date industry-relevant expertise.”

Speaking at the launch in the Chester Beatty Library in Dublin Castle, Minister for Education Ruairi Quinn said it would be a matter for Solas in conjunction with the relevant ETB to decide if a course was not delivering.

“Should people be afraid of this or frightened of this? Not necessarily because the skills that are in that college, institution or ETB I would imagine would be redeployed and we would get value for money.”

The Teachers’ Union of Ireland (TUI) criticised the strategy for being “utilitarian and narrow” and expressed concern that “the needs of industry and commerce will over-power the second-chance education needs of individuals”.

Assistant General Secretary Declan Glynn said the union was also “very gravely” concerned that future further education provision “will be allocated to private organisations established to provide profit for their owners, and for whom the holistic education needs of learners is a distant, lesser priority to ‘the bottom line’.”

However, Michael Moriarty, the general secretary of Education and Training Boards Ireland, representing ETBs, described the planned reforms as “timely and critical”. But he stressed the need for capital investment saying “it is absolutely unacceptable that many of the facilities” in the sector were not fit-for-purpose.

On performance funding, Solas chief executive Paul O’Toole said: “The way to look at this is not as a negative or threatening way. It’s a collaboration between providers and the state to ensure we are jointly achieving our shared goals.”

Minister of State for Training and Skills Ciarán Cannon, who also attended the launch, emphasised the need “to persuade school leavers” and parents that the choice of a course in further education was “a rational and valuable one - not one that is lesser to the higher education options which exist”.

- Review provision of further education to meet changing skills needs in the economy.

- Explore feasability of year-round access to training and further education.

- Make further education a “first choice“ for many school leavers, employers and others.

- Private/contracted out provision in further education “may need to increase in the future”.