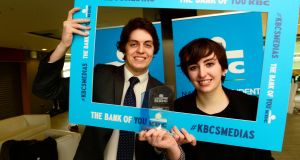 Patrick Kelleher and Grainne Loughran from UCD’s University Observer, winner of the Newspaper of the Year award in the National Student Media Awards. Photograph: Cyril Byrne

UCD’s student newspaper, the University Observer, has won the newspaper of the year award for the fifth time in the annual National Student Media Awards. The newspaper has been published since 1994.

The awards, which are organised by student website Oxygen.ie, are in their 16th year.

UCC received eight awards at the ceremony in Dublin attended by more than 300 students involved in college journalism.

Editor of the year was Ellen Desmond of Motley magazine at UCC, which was named magazine of the year.

Journalist of the year was Sarah Taaffe Maguire of TCD. Photographer of the year was James Keown of Griffith College Dublin. The colour writer award went to Robert O’Sullivan of UCC.

The outstanding achievement award presented by main sponsors KBC for an outstanding contribution to the student media world went to Niamh Geoghegan of DIT. TCD's Fionn Rogan won The Irish Times' Student Hub award for his article 'Yeats is dead. This is the new breed of Irish writers.'