Secondary teachers’ unions in row over ‘poaching’ of members 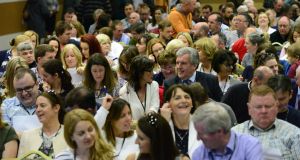 ASTI delegates at their meeting in Citywest Hotel in June. More than 1,200 members of the ASTI are estimated to have left the union between January and June. Photograph: Cyril Byrne

An investigation is under way into claims by the Association of Secondary Teachers, Ireland (ASTI) that the Teachers’ Union of Ireland (TUI) recruited significant numbers of its members during its dispute with Government.

Under Irish Congress of Trade Unions (Ictu) rules, unions are not permitted to recruit members of rival unions during an industrial dispute.

The dispute has the potential to undermine attempts by some members in teachers’ unions to present a united front of opposition to the new public sector pay deal.

More than 1,200 members of the ASTI are estimated to have left the union between January and June this year after it was the subject of financial penalties worth thousands of euro due to its “repudiation” of the Lansdowne Road pay deal.

The TUI, meanwhile, is understood to have increased its membership significantly over the same period.

Teachers who signed up with the TUI at the time stood to benefit significantly from pay increases which were being withheld from ASTI members.

Following a complaint from the ASTI earlier this year that members or former members were being recruited by the TUI, a disputes committee is understood to have been established recently by Ictu to examine the claims.

A spokeswoman for the ASTI confirmed that an investigation was under way but declined to comment further.

“The ASTI and TUI are co-operating with an Ictu process in relation to this matter. It would therefore be inappropriate to comment further,” she said.

The TUI declined to comment, but sources have rejected claims that it deliberately recruited rival union members.

One source said much of its increase in membership was linked to third-level lecturers joining the union or secondary teachers who were not members of any union.

In addition, it said it went “out of its way” to ask teachers signing up to the TUI whether they were members of another union.

The loss of members from the ASTI has stopped since June, when the union suspended its industrial action following a grassroots revolt against the leadership’s campaign strategy. Its members are now entitled to the same gains as the TUI.

It seems likely that all three teachers’ unions will oppose the new public sector pay deal, meanwhile, on the grounds that it does not go far enough to address the issue of lower pay levels for new entrants.

However, the unions look set to take difference stances in their opposition to the agreement.

A dilemma facing unions is that any “repudiation” of the agreement would lead to fresh penalties and pay freezes for members.

However, if they reject but abide by the terms of the agreement, they will be in line for pay restoration provided for under the agreement.

The TUI and the Irish National Teachers’ Organisation (INTO) have both rejected the agreement, while the ASTI is set to ballot next month.

The TUI , which voted to reject it by a margin of 81 per cent, has said that it will not be bound by the aggregate Ictu vote in favour of the deal. It also has a mandate for industrial action.

The INTO has opted to engage with a Government review of pay equality which is due to get under way, despite members voting by 89 per cent to reject the agreement.

The union insists it has not accepted the agreement but that it is in the “best interests of members” to take part in the review of pay equality.

The ASTI’s central executive has recommended to its members that they reject the deal.

ASTI school stewards are being asked to distribute and collect ballot papers between October 9th and October 16th. The closing date for receipt of ballot papers is Wednesday October 18th.