Heather Shoes shop on Arran Quay, Dublin is closing down. Opened in 1868, it has specialised in large size footwear for men for the last 25 years. Owners David and Denise Heather are retiring after more than 40 years. Video: Bryan O'Brien 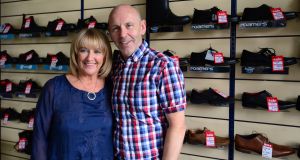 Denise and David Heather in their store which specialises in outsized shoes at Arran Quay, Dublin which is now closing down. Photographs: Bryan O’Brien 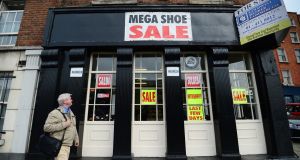 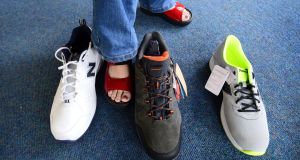 Today, the doors will close at Number 8 Arran Quay in Dublin for the final time, and a family business that has been trading since 1868 will cease. Our capital city will lose yet another independently-run shop, with all its associated social history.

The Heather family originally ran a general drapery on Arran Quay, but for more than half a century now, the business has concentrated on shoes. Since 1990, they have been selling outsized men’s shoes only, and their distinctive corner premises overlooking the Liffey will be familiar to anyone who travels the quays.

Earlier this week, I spent a morning with David and Denise Heather, as they counted down the last days of a business in which they have spent almost 50 years working. The couple first met when Denise had a summer job at 14 in the shop. They married in 1976, and have worked alongside each other at Arran Quay ever since. As David says: “We’re retiring, but we’re not like other retired couples, because we’ve always been under each other’s feet.”

Feet is their trade, or rather, men’s extra large feet, which require the outsized sizes they specialise in. “You’d get a pain in your neck working here, looking up, because all the customers are so tall,” David jokes. The most common sizes they sell are 13, 14 and 15, but they stock all kinds of footwear up to an astonishing size 20. “We wouldn’t have lasted out the recessions without having a niche business,” he says.

Heathers sell slippers, wellies, work boots, runners, brogues, slip-ons, desert boots, dress shoes and fashion shoes. Surprisingly, a shoe in size 20 is the same price as one in a 7, even though the scale is so much greater.

David takes down a couple of size 20 boots and runners. They are, without doubt, the largest items of footwear I have ever seen in my life. You could easily kennel a couple of puppies in each of them. I am a woman’s size 4, and my photographer colleague has a merry time doing some comparison shots.

They always put something eye-catching in the window, to attract the attention of passersby. Today, it’s a size 16 sandal. “We get a lot of hen parties coming in to take pictures, on their way to Smithfield or the Jameson Distillery,” Denise says. She has heard all the hen party jokes about men with large feet. “I tell them it’s true what they say about men with big feet - they wear big socks.”

The couple have already sold the premises but the new owners won’t be carrying on with the outsized shoe business.

“We didn’t get one inquiry from anyone about taking over as a going concern,” David says, admitting he is sad that the business will disappear with them, although they will continue to have a modest presence online, at bigshoes.ie.

Three-quarters of their business is repeat, with a long-time loyal customer base. “Our customers are everyone from council bin men to barristers and politicians.” The late Brian Lenihan was a customer.

One of their long-time customers, Hugh Pierce, has heard Heathers is closing, and has come in to buy his last pair of boots here. He is a size 12. Pierce tries on a utility boot, chatting as he does.

“This is a traditional Dublin shop, and it’s sad to see everything being replaced by chains,” he says. As Pierce is trying on the boots, David reminisces that in the 1970s, he once counted 21 independent shoe shops on the stretch from the top of Talbot Street to the bottom on Mary Street.

It’s not only men in need of outsized shoes who will miss Heathers. While we are there, a homeless man passes the window, pushing the bicycle that carries all his possessions. Denise runs out to greet him, and returns with his mug.

As he waits outside, David tells me they know this man of old, and that he sleeps in a tent in the Phoenix Park. Denise brings him out his mug, now full of hot tea, and spends time talking to him. The Heathers do this every time they see him.

You can buy a lot of things online these days, but ritual acts of kindness by independent traders to Dublin’s most vulnerable citizens are not among them.