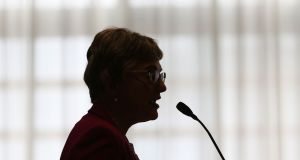 Dr Katherine Zappone, Minister for Children, is planning to provide extra funding for high quality preschools under a new plan to boost standards in the sector. Photograph: Nick Bradshaw

A new two-tier funding system for preschools is to be introduced which will reward “gold standard” crèches and childcare centres with more resources, under new Government plans.

The move is aimed at boosting standards of early years care and education for children up to the age of five.

The plan is contained in a new 10-year strategy on early childhood care and education – known as “First Five” – to be published by Minister for Children Katherine Zappone next week, according to well-placed sources.

The funding model will reward high-quality preschools, creches and childcare centres where staff have good qualifications and are involved in continuous professional development.

These preschools will also be required to keep their fees under maximum levels set by Government and to open within minimum operating hours.

The new funding model will operate on an “opt-in” basis, say the sources.

Preschools that do not opt to participate will continue to access funding through existing State schemes such as the early childhood care and education (ECCE) programme.

Research and planning on the new funding model is set to get under way next year.

An independent, international, expert panel will be appointed by Dr Zappone in the coming months to make detailed recommendations on how the new funding model should operate.

Based on these recommendations, the Government hopes to devise a contract for early learning and care providers to deliver high-quality services to young children and their families.

Another element of the new strategy will involve additional funding for preschools in poorer areas.

These plans are based on the Deis (Delivering Equality of Opportunity) model which provides extra resources for disadvantaged primary and secondary schools.

Research shows that children from middle-class families outperform those from less well-off homes even before they begin national school.

A recent Economic and Social Research Institute study, for example, found evidence of a significant gap in children’s language development at as early as three years of age depending on their socio-economic background.

However, high-quality early years care and education has been shown to have a dramatic effect in boosting children’s learning, as well as supporting wellbeing, mental health and positive socio-emotional outcomes.

The strategy is understood to prioritise investment in high-quality early years care and education for all children by pledging to provide additional supports in areas where there is a high proportion of children at risk of poverty.