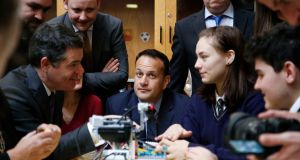 Taoiseach, Leo Varadkar and Minister for Finance and Public Expenditure Paschal Donohoe with students at Larkin Community College at the at the launch of a project to boost pupils’ opportunities in the digital economy. Photograph: Nick Bradshaw

Schoolchildren in Dublin’s north inner city are to take part in a new programme which aims to give local students a career pathway into the digital economy.

The programme is modelled on a successful scheme developed by IBM in New York which has helped hundreds of students secure tech jobs after leaving High School.

Under the programme, students in three participating Dublin schools will be able to participate in paid internships, benefit from the support of industry mentors and expert tuition while still in secondary school.

By the end of the programme - which runs until their Leaving Cert - students will emerge with a formal digital qualification.

These graduates will be “first in line” for jobs with industry partners or in a position to progress to secure a third level qualification.

It is due to begin in three schools - Marino College and St Joseph’s CBS, Dublin - though officials involved in designing the scheme say it has potential to grow significantly.

The New York scheme currently involves 100 schools and other countries, with more than 500 businesses participating. Ireland is the first country in Europe to adopt the model.

“We want to give all children and young people the best possible start in life, whatever part of the country they are growing up in,” he said.

“I’m delighted this pilot is being launched in the north east inner city; if young people in this area are given the best possible chance to succeed, the entire community will benefit”.

The National College of Ireland will be the initial third-level education partner. while IBM, Cisco, Virgin Media, Irish Water and Irish Life will participate as the first industry partners.

The programme is part of a wider drive to promote the long term social and economic regeneration of the Dublin North East Inner City area.

It was sparked by a spate of gangland shootings in the area and concerns for future prospects of young people in the area.

Minister for Education Joe McHugh said young people in inner city Dublin were getting a unique opportunity through the pilot.

“They will be the pioneers of this project. It will open doors for pupils in terms of education and they will leave school ready for a career.

“The project is about giving the next generation the experience, confidence and skills to compete in a fast changing world of work and to allow them to be role models for their schools and communities.”