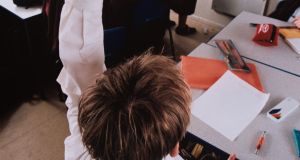 The TUI stated that irrespective of the ballot outcome, its campaign would ‘continue until pay equality has been delivered’.

The Teachers’ Union of Ireland (TUI) is to ballot members on the Government’s new proposals to tackle the two-tier pay system in the public service without a recommendation.

The union said the proposals had different implications depending on the career stage of the individual member.

Following a meeting of its executive committee on Wednesday, the union re-stated its view that the proposals “do not deliver pay equality and will not tackle the recruitment and retention crisis currently afflicting second level schools”.

The TUI represents about 17,000 teachers and lecturers.

The Government on Monday tabled proposals to end the system of those recruited since 2011 receiving lower pay than more longer-serving colleagues by allowing those affected to catch up by jumping two increments on their pay scale over a number of years.

The TUI said its executive committee had decided that members “should be provided with comprehensive information on all aspects of the proposal so that they can make a considered decision on its acceptability or otherwise”.

The union stated that irrespective of the ballot outcome, its campaign would “continue until pay equality has been delivered”.

“While the measure represents further movement, it won’t deliver pay equality,” he said.

“As the most significant difference in scales will still be in the initial career stage, the crisis of teacher recruitment and retention in schools across the country will continue. As a result of this, schools will struggle, and in many cases fail, to recruit and retain suitably qualified teachers across a range of subjects.”

“It is deeply regrettable that this process did not address the non-payment of the HDip allowance to those who entered teaching since February 2012.

“This is despite the fact that the duration of the Postgraduate Master in Education (PME) has doubled to two years, leading to significant extra cost – and significant debt – for new teachers. In addition, post- January 2011 entrants lost the entitlement to start on the third point of scale in recognition of the unpaid training period which now runs to six years.”