TUI must cross ASTI picket lines in order to be paid 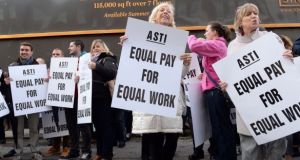 The Teachers’ Union of Ireland is expected to advise members that they will have to cross picket lines put in place by the Association of Secondary Teachers Ireland if they want to be paid.

The TUI’s executive committee is due to meet on Friday to provide guidance to members on how to respond to industrial action being taken by its sister union.

It is expected that theexecutive will advise members that anyone who refuses to cross a picket line is at risking of losing pay and may not be protected under industrial relations legislation.

The TUI has declined to comment ahead of the meeting, However, sources say it is likely to further advise that it will seek to protect any member who opts not to cross a picket line for reasons of conscience.

The issue of how the TUI responds is sensitive, given that up to 160 secondary schools have significant numbers of teachers who are members of both trade unions.

ASTI members are set to stage seven days of strikes between the end of October and early December.

In addition, they plan to cease carrying out supervision and substitution duties from Monday, November 7th, onwards, a move likely to close hundreds of schools indefinitely.

Sources say that because the ASTI has not sought permission from the Irish Congress of Trade Unions for an all-out strike , TUI members will be expected to report for work as normal.

Under industrial relations legislation, members of all Ictu trade unions recieve protection in cases where an all-out strike is permitted. This tends to happen only in extreme cases.

Two other unions, the Irish National Teachers’ Organisation and Impact, are set to issue similar advice to members over the ASTI’s action.

The Department of Education, meanwhile, is expected to offer a deal to the ASTI in a bid to halt looming industrial action.

Sources say it will offer to restore payments to secondary teachers for carrying out supervision and substitution duties if they rescind plans to cease working unpaid teaching hours, which were originally agreed as part of a productivity agreement.

A similar offer made during the summer was rejected by the ASTI and it is likely the union will also reject the latest offer, according to sources.

The ASTI says it is not seeking complete pay restoration for all its members, but rather pay equality for a cohort recruited since 2011.

The union says this group of recently recruited teachers were being paid significantly less than those taken on prior to the economic crash.

Minister for Education Richard Bruton will not be present for the talks as he is involved in a trade visit to China.

However, he intends to cut short the visit and is due back in the country later this week.

The ASTI’s 17,000 members are to withdraw from carrying out supervision and substitution duties from November 7th, on foot of penalties imposed on them by the Government for “repudiating” the Lansdowne Road public service agreement.

This measure, in itself, would result in the closure of up to 525 second-level schools after the mid-term break unless suitable personnel can be found in time to carry out these arrangements .

It is highly unlikely supervisors will be found, given the tight time frame available to recruit, hire and vet hundreds of personnel.

In addition, the ASTI has refused a request for members who are principals in schools to help with putting contingency plans in place for the strike.

* This article has been amended to correct a factual error