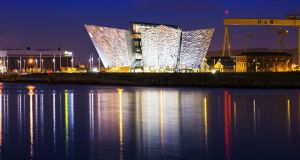 Sterling’s slide against the euro created record demand for hotel bedrooms in the North last year, delivering a “landmark” performance for the hotel industry particularly in Belfast, the latest industry research shows.

Hotel occupancy rates hit a high of 77.9 per cent for the first time, while the average room rate also increased by 4.1 per cent, according to the ASM Chartered Accountants annual hotel industry survey.

Overall, according to Michael Williamson, director of consulting at ASM, 2016 proved to be an “outstanding year” for the North’s hotel sector.

“Without doubt the almost instant decline in the value of sterling on the back of the EU referendum result in June 2016 boosted our competitiveness as a destination, and in Belfast especially this made a tangible difference to the demand for accommodation in the second half of the year,” Mr Williamson said.

The ASM survey found that an increase in revenues boosted average profits per hotel room in the North by 17.7 per cent to £10,816 last year.

Overall, total revenues per room, which includes income from all hotel activities, increased by 15.7 per cent to £53,363 in 2016, according to the survey.

Mr Williamson said there were regional variations in the performance of hotels across the North, with Belfast topping the polls with an occupancy rate of 83.5 per cent.

He said rural and resort/spa hotels also had “a great year”, with increased revenues and profits – the bedroom occupancy rates were 76.0 per cent and 80.3 per cent.

But the survey shows that in Derry City although demand for bedrooms increased, operating costs also spiralled, resulting in a decline in profits for the city during 2016.

Mr Williamson said although weak sterling played a key role in boosting the hotel sector’s performance last year there were also other factors at play.

He said the opening of the extended Waterfront Hall in Belfast has massively improved its appeal to high-spending meetings, conventions and exhibitionsparts of the tourism market.

“It is clear that maintaining the free movement of people across the Border is essential to the hospitality and tourism sector and to the general economy.

“Post-Brexit this freedom of movement needs to be maintained for our hospitality sector to continue to grow,” Mr Neill said.

Meanwhile, retailers are also reporting a notable rise in the number of shoppers from the Republic who are taking advantage of the weaker pound.

Lauren Campbell, marketing manager of Belfast’s Victoria Square, which has more than 70 stores, cafes and restaurants, said said year-on-year its footfall has increased 4 per cent.

“We are definitely seeing a lot more tourism trade. Belfast is much better value for euro visitors at the moment because they are getting a lot more when they spend their money in Belfast - whether it is on jewellery, fashion or a big ticket item or just eating out,” Ms Campbell said.

1 How safe is it to go back to the office?
2 Elderly parents living in property you own will save you on capital gains tax
3 More than 40% of help-to-buy recipients already had deposit
4 Construction workers among first PTSB borrowers off payment breaks
5 Most workers now expect choice to work from home part-time
6 Owner of Dundrum Town Centre to sell prized assets
7 Cinema tensions laid bare by deep crack in theatrical release windows
8 56 financial firms entered or expanded Irish operations in 2020
9 HealthBeacon becomes official NHS supplier and seeks extra funds
10 Virgin Media Television expects to lose a quarter of ad revenue in 2020
Real news has value SUBSCRIBE