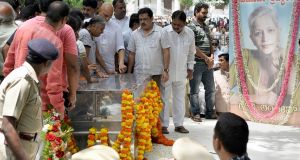 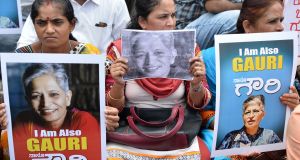 Thousands of demonstrators across India on Wednesday condemned the murder of a prominent journalist outside her home.

Activists, journalists and opposition party members, amongst others, demanded the arrest of the gunmen who shot Gauri Lankesh (55) on Tuesday evennig as she left her car to open the gate to her house in a suburb of the southern city of Bengaluru (formerly Bangalore).

City police commissioner T Suneel Kumar said Lankesh’s three assailants, who fled on a motorcycle after the shooting, fired seven rounds at her; three hit her in the chest and one in the forehead, killing her instantly.

Police officers said three investigative teams had been formed to track the killers, and were examining footage from the recently installed CCTV cameras at her house. They said that in all likelihood the killers were professional assassins.

The CCTV cameras had been installed by the journalist after a series of break-ins at her home following threats she had received on social media from right-wing Hindu organisations, whose sectarian agenda she continually criticised and opposed.

She was convicted of defamation over the article last November and sentenced to six months in jail, but was out on bail pending an appeal. She had remained trenchant in condemning the BJP over its “divisive” politics and espousal of Hindutva or Hindu hegemony.

She told the Indian website Newslaundry last year that the “rabid hate” directed at her online had made her fear for the state of free expression in India. “Unfortunately, today anybody talking in support of human rights and against fake encounters [extrajudicial killings] is branded a Maoist supporter,” she said.

“Along with that, my criticism of Hindutva politics and the caste system ... makes my critics brand me as a Hindu hater. But I consider it my constitutional duty to continue – in my own little way – the struggle of [12th-century Hindu philosopher] Basavanna and [social reformer] Dr [Bhimrao Ramji] Ambedkar towards establishing an egalitarian society,” she said.

Several thousand journalists gathered at press clubs across the country on Wednesday demanding justice for Lankesh and calling for a firm stand against forces trying to muzzle the voices of dissent.

In a statement, the Editors Guild in New Delhi said Lankesh’s killing was an “ominous portent for dissent in democracy and a brutal assault on India’s press freedom”.

At the Delhi Press Club, Pranjoy Thakurta, former editor of the prestigious Economic and Political Weekly, said the space for free thinking was shrinking in India. “We cannot remain silent as that is what they want. Don’t keep quiet as that would be their success,” he said.

Sonia Gandhi, the main opposition Congress Party leader, echoed this sentiment, saying the killing was a chilling reminder that “intolerance and bigotry is raising its ugly head in our society”.

Amnesty International called upon state governments to protect voices of dissent that are being silenced. In a statement Amnesty’s Asmita Basu asked the police to determine whether Lankesh was murdered because of her journalism.

Lankesh was cremated in Bengaluru with full state honours, including a gun salute.